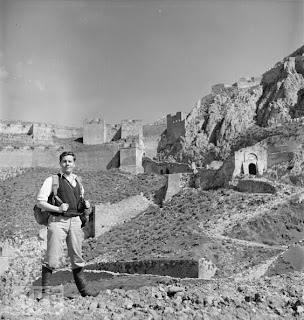 Three years ago Pierre MacKay reviewed the new edition of Kevin Andrew's Castles of the Morea with Glen Bugh's fine introductory essay.  Recently, a publisher who had seen the review sent us a copy of the new edition of Andrews' Flight of Ikaros, the most powerful of all the "travel" books ever written about Greece.  This is the original edition, not the second edition that was tarted up with political harangue.  There is more than enough of the political intensity and fury of the Civil War in the original Ikaros to satisfy anyone.

This new edition, has to my mind, wrongly, and without editorial explanation changed at least one of the names Andrews used and so it shifts the way Andrews came at things.  For example, he wrote extensively of the harshness -- terror-- he encountered at Yerákova, in the meanness between ELAS and CHI, and having no preconception about Yerákova we are shattered by what he encountered, particularly in the long conversations with Kostandi. 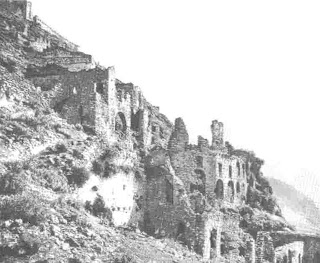 This new edition has helpfully changed Yerákova to Mistra, and once you have the name Mistra you cannot but clutter his account with your own ideas of the place. Even though you recognize Andrews' "flat triangular slope . . . the ghost city . . . seven centuries old" as long as it is Yerákova you are forced to see Andrew's city. (Although the new edition missed the Yerákovítes (192; orig. 188) and should have turned them into Mistriotes.)


This is Andrews' account of his first visit to Ayios Yannis:


Walking along a rocky lane between the narrow walls, I looked for a way in, but there was only an arch opening on a courtyard with the three gates of the church walled up with masonry at the far end.

Then a voice called; an old woman leaning over a parapet overhead motioned me to another archway farther down the wall.  Inside, a flight of open steps led up the side of the church.  She stood at the top, clawing at the air. 'Come up, come up.  You can't get in the other way.  There are no proper stairs inside for us, the evil-fated.'  She withdrew through a tiny door, mumbling incomprehensibly with toothless gums.  I followed.

Coming in out of the light, I slowly began to see figures moving across a vaulted platform littered with piles of bedding and household goods.  It was the upper part of the church originally intended for the use of women who were not allowed to come nearer the ceremonies below.  Everywhere, a grey half-light hung in the vaulted spaces of the clerestory, filtered down from rings of windows underneath the several domes into a narrow depth of columns and darkly frescoes walls.  Through air stale with the after smell of incense and snuffed-out candles I could just make out the shrouded, icon-bearing encrustations of sanctuary and altar when I stepped on somebody's leg, and a boy with a fat, round face sat up convulsively, then sank back gurgling and slowly jerking on a straw pallet.

. . . I was glad to be out in the light, but the sun had gone.  We went round through the courtyard I had first seen and passed under four archways into a graceful peristyle of smooth marble columns, open to the east over the plain of Sparta.  There was an upper balcony with wooden poles and tiled roof, and in one colonnade paving-stones and the timbers of a fallen stair lay ina heap under a great hole in the gallery above.  Through a door to the church on the lower level half-naked children came out and stared at me. 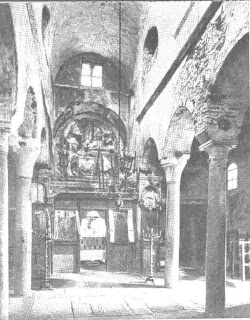 Ayios Yannis is Ag. Demetrios, the Mitropoleos.  The picture above was taken after the refugees were scooped out and the church cleaned.


If you do not own The Flight of Ikaros, you should.  Amazon has it inexpensively.  The original 1959 edition is more expensive from Amazon, less bought from an English bookseller.
Posted by Nauplion at 12:45 PM