Columbus: What They Wrote 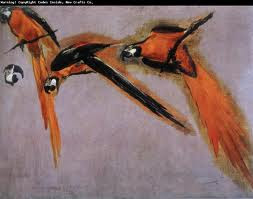 Parrots, Peter Boell
Two contemporaries of Columbus report what they had learned about his voyages:

Pietro Bembo's History of Venice:
Heading from there [the Canaries] into the setting sun for 33 days together, he discovered six islands, two of them very large indeed, where nightingales sing in November and naked men of a gentle nature use boats made of a single tree trunk. These people have a cereal which they call maize, with much bigger ears and stalks than ours, reedy foliage, and very numerous plump grains which are attached to the ear and covered with a sheath in place of beards, which it casts off as it matures. they have very few kinds of quadrupeds, among them tiny dogs which are actually mute and do not bark. But they do have a great many types of birds, both larger and smaller than ours, so that some little birds are found which together with their nests weigh no more than a 24th of an ounce each.

There are parrots of various shapes and colors in great abundance. They collect fleeces which grow by themselves from the woods and hills, but when they want to make them whiter and finer, they clean them and plant them by their homes. They have gold, which they collect in the sands of the rivers; they do not have iron. In its place they use specially hard and sharp stones, both for hollowing out their boats and for shaping other wood for domestic use and working gold. But the gold they work only for ornament, wearing it suspended from their pierced ears and nostrils -- they are indeed unacquainted with coinage, nor do they use any kind of money. 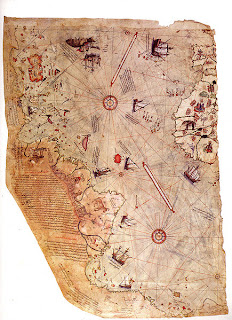 These coasts are named the shores of Antilia. They were discovered in the year 896 of the Arab calendar. But it is reported thus, that a Genoese infidel, his name was Colombo, be it was who discovered these places. For instance, a book fell into the hands of the said Colombo, and be found it said in this book that at the end of the Western Sea [Atlantic] that is, on its western side, there were coasts and islands and all kinds of metals and also precious stones. The above-mentioned, having studied this book thoroughly, explained these matters one by one to the great of Genoa and said: "Come, give me two ships, let me go and find these places." They said: "O unprofitable man, can an end or a limit be found to the Western Sea? Its vapour is full of darkness." The above-mentioned Colombo saw that no help was forthcoming from the Genoese, he sped forth, went to the Bey of Spain [king], and told his tale in detail. They too answered like the Genoese. In brief Colombo petitioned these people for a long time, finally the Bey of Spain gave him two ships, saw that they were well equipped, and said:

"O Colombo, if it happens as you say, let us make you kapudan [admiral] to that country." Having said which he sent the said Colombo to the Western Sea. The late Gazi Kemal had a Spanish slave. The above-mentioned slave said to Kemal Reis, he had been three times to that land with Colombo. He said: "First we reached the Strait of Gibraltar, then from there straight south and west between the two . . . [illegible]. Having advanced straight four thousand miles, we saw an island facing us, but gradually the waves of the sea became foamless, that is, the sea was becalmed and the North Star--the seamen on their compasses still say star--little by little was veiled and became invisible, and be also said that the stars in that region are not arranged as here. They are seen in a different arrangement. They anchored at the island which they had seen earlier across the way, the population of the island came, shot arrows at them and did not allow them to land and ask for information.

The males and the females shot hand arrows. The tips of these arrows were made of fishbones, and the whole population went naked and also very . . . [illegible]. Seeing that they could not land on that island; they crossed to the other side of the island, they saw a boat. On seeing them; the boat fled and they [the people in the boat] dashed out on land. They [the Spaniards] took the boat. They saw that inside of it there was human flesh. It happened that these people were of that nation which went from island to island hunting men and eating them.

They said Colombo saw yet another island, they neared it, they saw that on that island there were great snakes. They avoided landing on this island and remained there seventeen days. The people of this island saw that no harm came to them from this boat, they caught fish and brought it to them in their small ship's boat [filika]. These [Spaniards] were pleased and gave them glass beads. It appears that he [Columbus] had read-in the book that in that region glass beads were valued. Seeing the beads they brought still more fish. These [Spaniards] always gave them glass beads.

One day they saw gold around the arm of a woman, they took the gold and gave her beads. They said to them, to bring more gold, we will give you more beads, [they said]. They went and brought them much gold. It appears that in their mountains there were gold mines. One day, also, they saw pearls in the hands of one person. They saw that when; they gave beads, many more pearls were brought to them. Pearls were found on the shore of this island, in a spot one or two fathoms deep. And also loading their ship with many logwood trees and taking two natives along, they carried them within that year to the Bey of Spain. But the said Colombo, not knowing the language of these people, they traded by signs, and after this trip the Bey of Spain sent priests and barley, taught the natives how to sow and reap and converted them to his own religion. They had no religion of any sort. They walked naked and lay there like animals.

Now these regions have been opened to all and have become famous. The names which mark the places on the said islands and coasts were given by Colombo, that these places may be known by them. And also Colombo was a great astronomer. The coasts and island on this map are taken from Colombo's map.