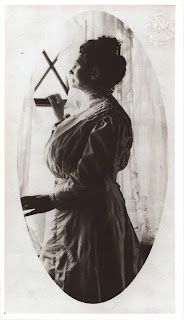 Esther Kirby Whitehurst
My grandmother, Ann Whitehurst Jordan, told me this story about her mother.  She, my grandmother, loved history -- mostly history of the mother of the Gracchi  and "I cannot tell a lie" sort -- and frequently illustrated some point or another with an historic example.  She shared a birthday with Mozart, and played the violin somewhat, and so she considered herself an authority on Mozart:  his favorite color was yellow; he loved canaries.  She was sure that my grandfather's name, Eugene, meant that he came from an aristocratic family, and that we were descended from the fifth wife of Henry VIII.  I am relating this to give the story a kind of context, to convey her sense of historical rigor, and to explain why I have been so fascinated that she considered Jesse James to be a hero.

My father, the missionary and preacher, did too.  Along with millions of other lower-middle-class Americans in the great middle strip of the US from Minnesota down to Mississippi and Alabama.  In their stories, Jesse James was a sort of Robin Hood, who took from the big banks and the railroads and gave to the poor.  Contemporary historians regard Jesse James otherwise, but I grew up with the popular hero, and for this story to work he is the popular hero.

My great-grandmother, Esther Kirby lived with her family in Kossuth, Mississippi, in Tishomingo County out of which came such horrors in the 1960s. There are five towns in the US named for Kossuth, and one of the endearing things about small-town America for me is the towns named for these beacons of freedom -- Bolivar, Tennessee and West Virginia, Ypsilanti Michigan.  Esther was born in 1860, she had heard the guns from the battle of Shiloh in 1862, and her family had taken in and nursed some of the wounded.  Her father--Irish famine immigrant Timothy Kirby -- went to war for the Confederacy, was taken prisoner, and interned in a Union prison at Alton, Illinois.  He so won the heart of the commandant that he was allowed to go on leave to see his family, on his word of honor that he would return.  He was given a Union uniform and one of Esther's earliest memories was being told that, "Ma's in the kitchen kissing a Yankee."

The family story says that he returned.  His CSA military record reports him as AWOL.  Both could be right.

At some point -- late 1870s, early 1880s -- the Kirbys took in two boarders, Bob and Charlie Ford, who traveled along the railroad line, stopping off where they could get work building chimneys.  After a while, Esther noticed that Bob Ford was, as my grandmother said, "sweet on her."  Then one day, when she was tidying up the dresser, she noticed a gold ring.  She told her mama.  Her mama told Timothy Kirby.  Timothy Kirby told Esther's brothers when they came in from the fields, and that evening the Kirby brothers escorted Bob and Charlie Ford to the county line and told them not to let themselves be seen in those parts again.

That was pretty much it.  Esther Kirby married Zebedee Benjamin Whitehurst on 26 January 1882.  In April 1882 word exploded across the country that Bob Ford, the dirty little coward, had shot Jesse James in the back on the 3rd.  While he was straightening his mother's photograph.

Shooting someone in the back was, of course, unspeakable.  But to dishonor a man's mother -- I don't know what the modern historians have done about his mother's photograph.

But look at the conjunction of those dates.  What is one to think?

My grandmother told me this story when I was 10, when we were living in Missouri, and my father drove us over to St. Joseph to see the James' house -- and retired President Harry Truman on the veranda of his.

The thought of how closely I escaped the humiliation of being the great-granddaughter of the man who shot Jesse James frightened me for years.  There wasn't a person in the country who didn't know Bob Ford as the dirty little coward.

It took me many more years to realize that I was the great-granddaughter of Zebedee Benjamin Whitehurst whose first love was books, and who had been known to buy another book when buying food for the family was a problem.  I am, most definitely, his descendant. 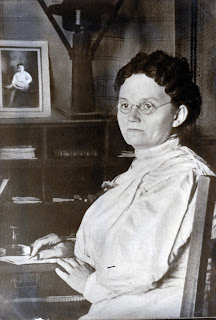 Esther Kirby Whitehurst at her desk.
My aunt said, "She did her correspondence
in the morning in a fine hand."
Posted by Nauplion at 6:16 PM