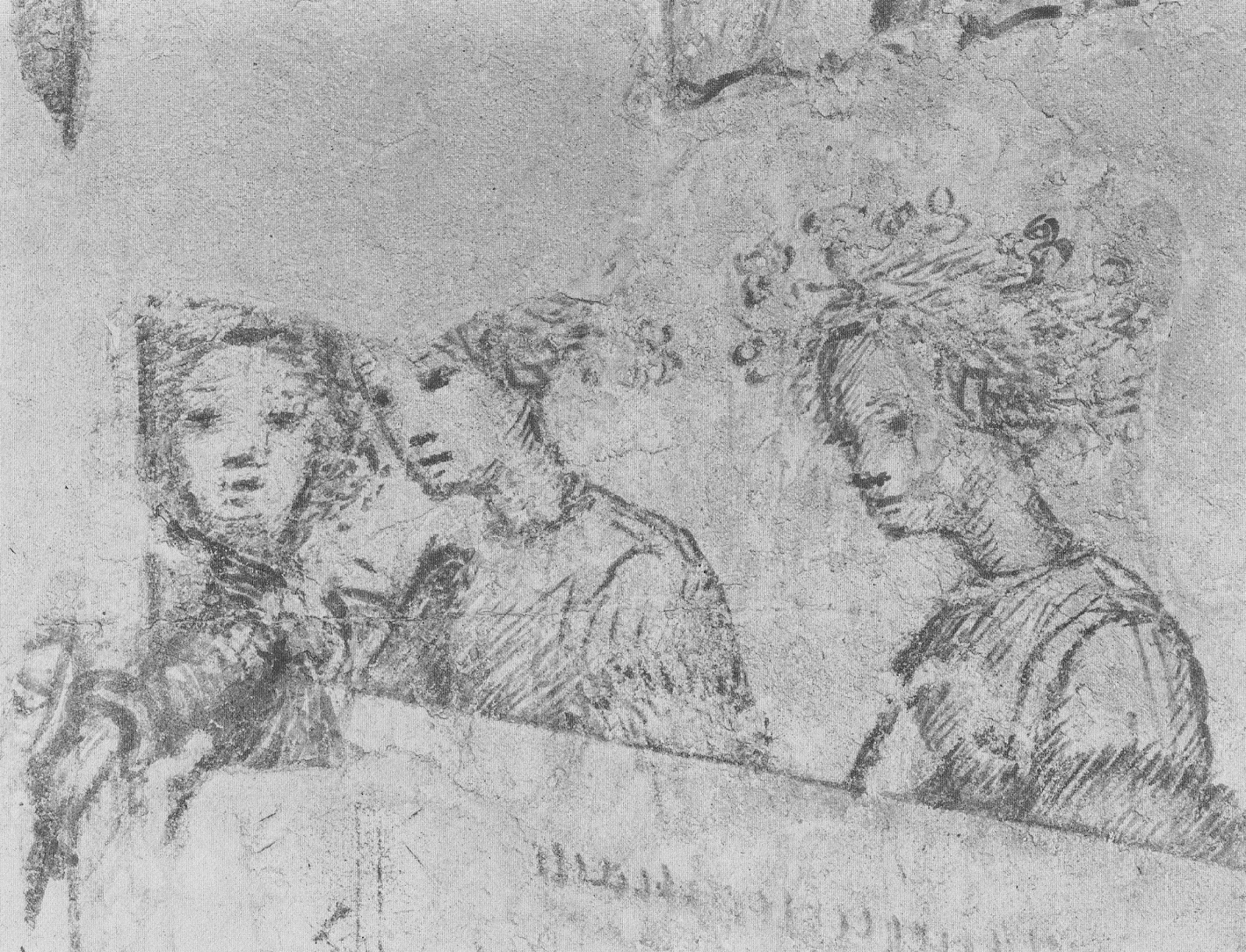 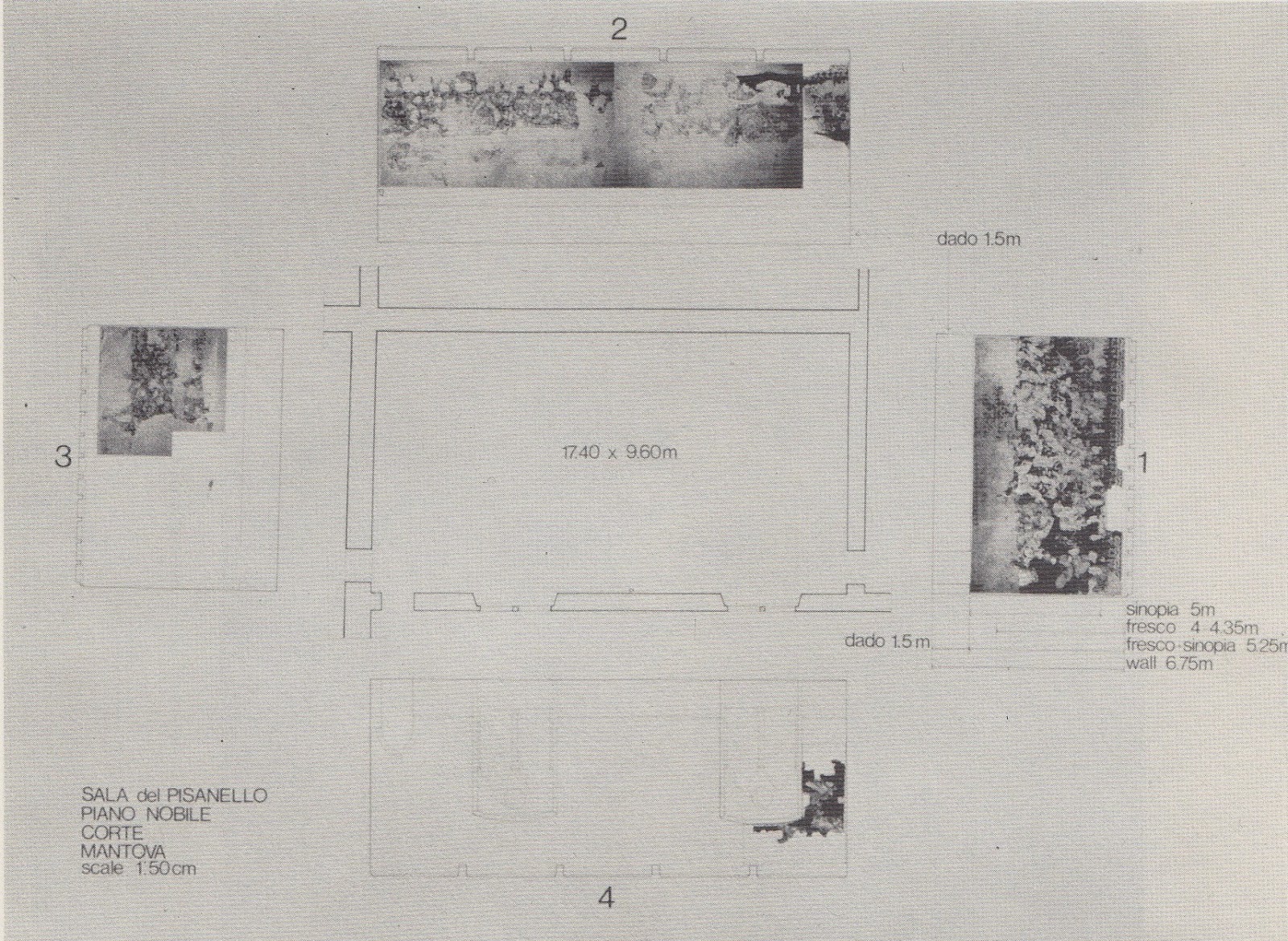 The sinopie have been removed and are on exhibit in another room: there are surviving parts of the sinopie that have not survived in the frescos, and vice versa.  The fresco/sinopia of my interest is from Wall 2, at the right-hand end.  This is what survives of the fresco, and you can compare it with the image at the beginning. 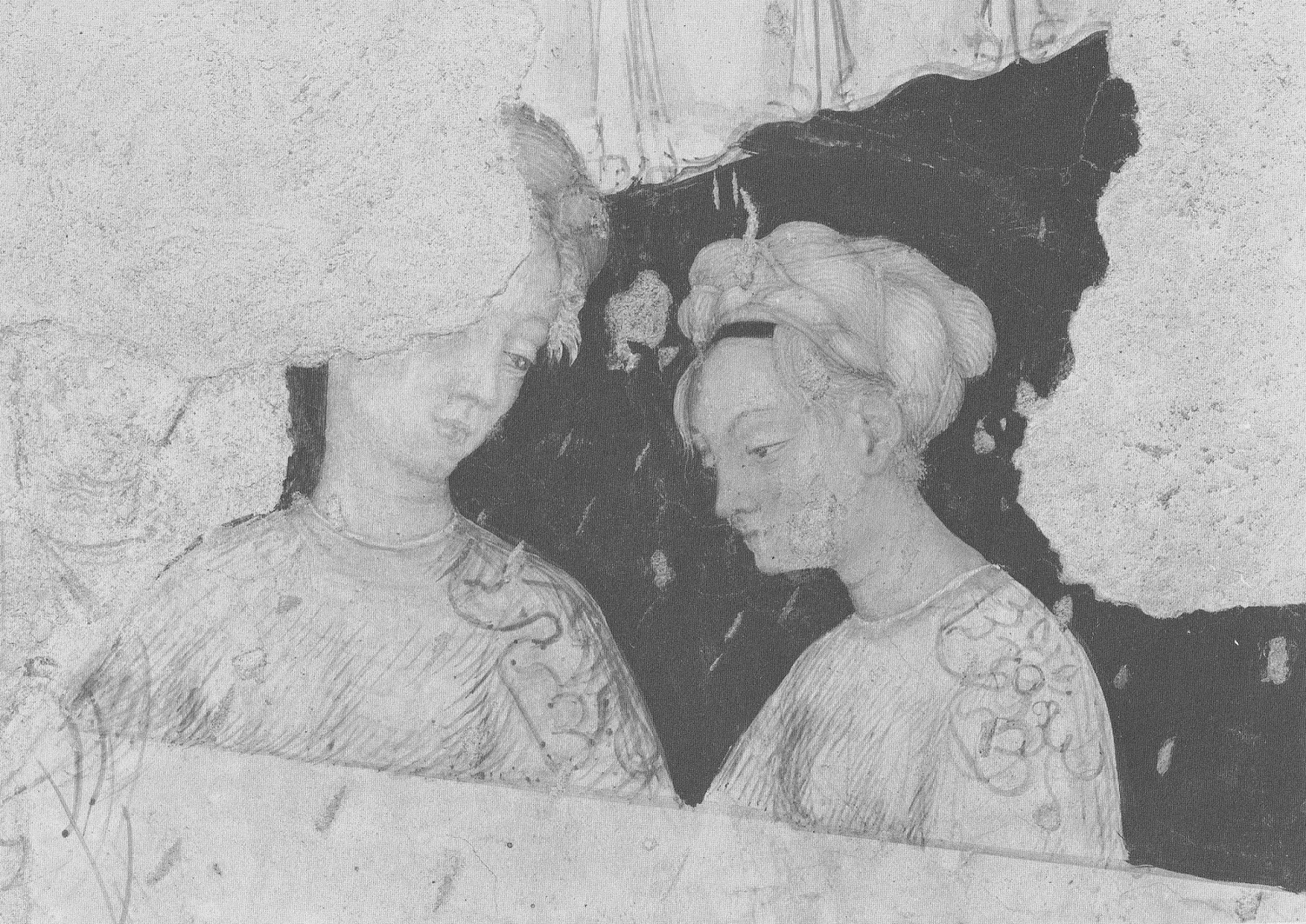 The frescos have been dated anywhere from 1425 to 1457, and each art historian can give good reasons for the chosen dates. Joanna Marsden-Woods, whose work on the frescos I have found most useful, prefers 1443-1444. I have my own preferred dates. JM-W also gives the Arthurian story behind these frescos, which concerns an important tournament.  The lady in question is under a canopy to the left of the image below. Indistinctly, there are some of the tournament figures to the right, on Wall 1.  If you compare the heads of the figures with the bricks in the wall at the bottom, you will begin to get an idea of how small and dense the figures are. 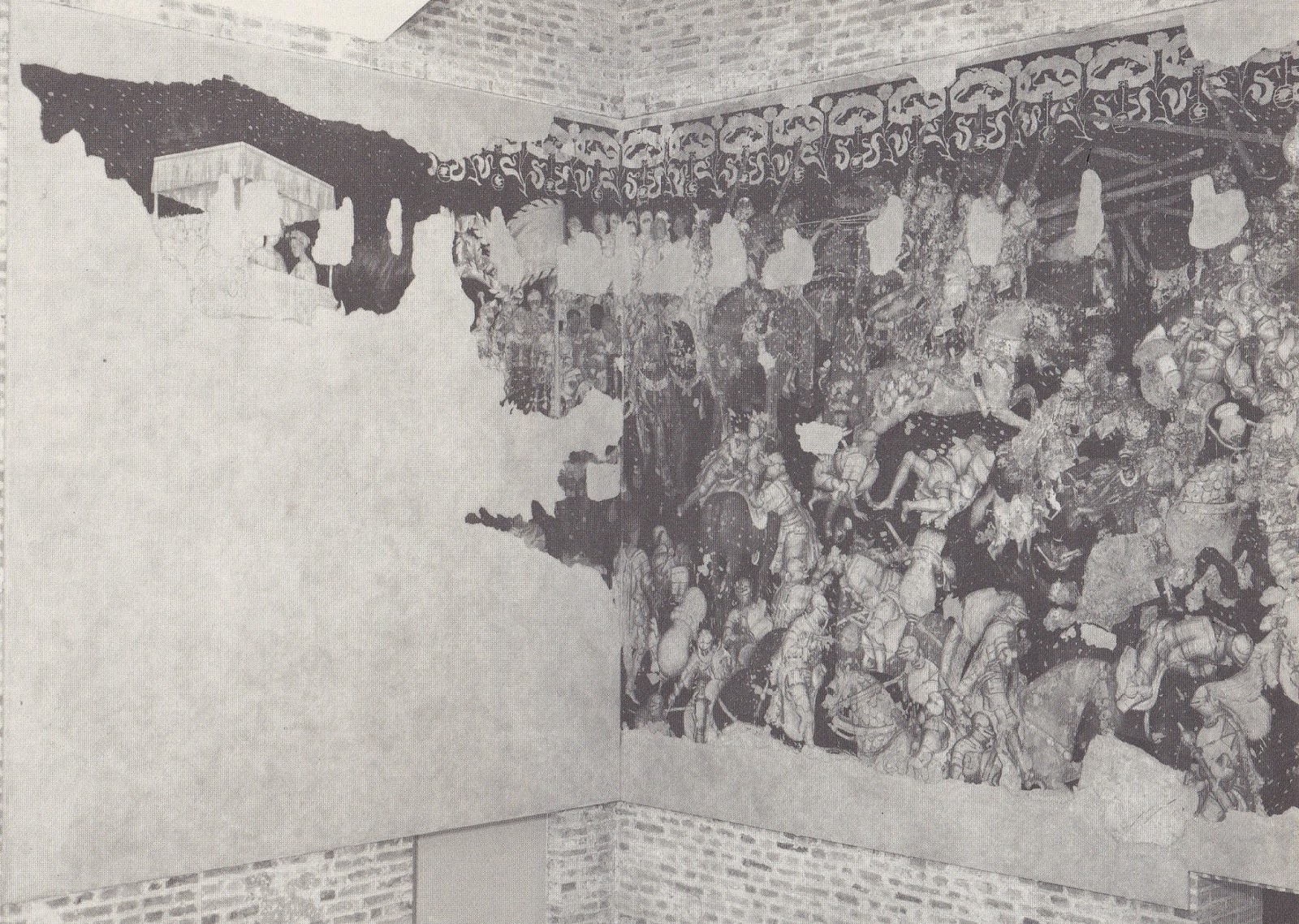 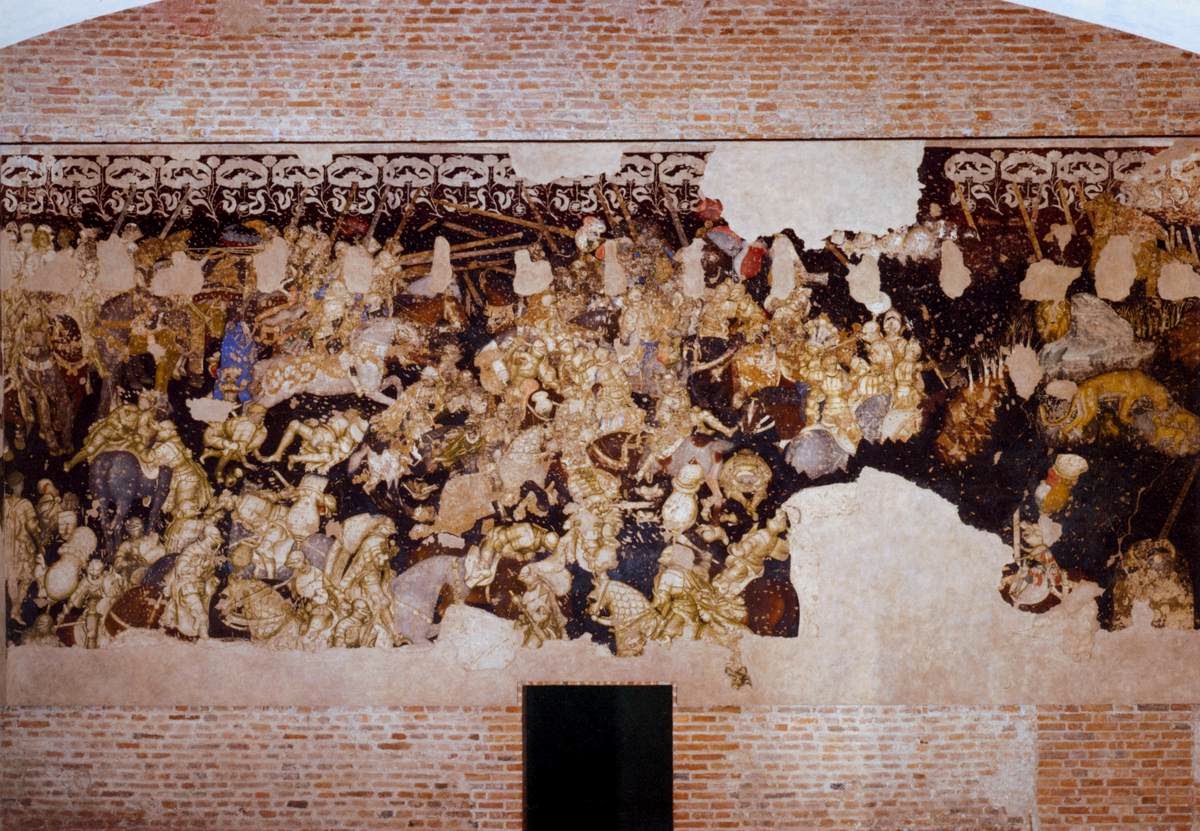 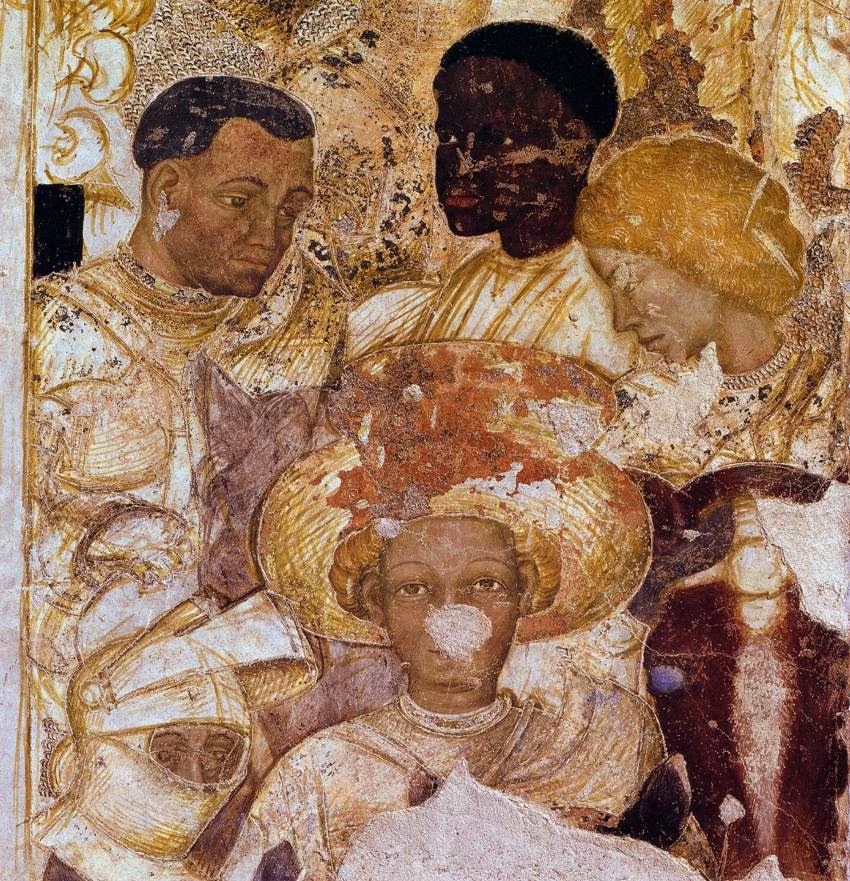 The tournament was given by a King Brangoire. The daughter of King Brangoire -- nameless in the story -- seduced Bohort, one of the three knights who accomplished the quest for the Holy Grail, at a tournament at her father's court, and by him had a son, Helain, who would become Emperor of Constantinople. Marsden-Woods does not explain what significance this story might have had for the Gonzagas of Mantua, or for her date of 1443-1444.  My date is 1428-1429, a good 15 years earlier.

But consider:  in February 1428, Cleofe -- after six years of a marriage in which her husband had refused a sexual relationship -- had  given birth to a daughter, Helena, the heir to the throne of Constantinople. None of the five living sons of Manuel II would father a son for twenty years. Might not Paola Malatesta Gonzaga enjoy having this painted reminder that she was the aunt of the possible future ruler of Constantinople?  The co-incidence of names -- Helain and Helena (Eleni) -- surely cannot be accidental.

I would like to see another element of the story as significant: Marsden-Woods says: "The love affair between Bohort and the princess, with its glorification of sexual passion, implied that a union between princes in real life could involve mutual passion and love." The sexual implication in the fresco is striking. If this Arthurian imagery effectively represented Cleofe's family's view of the sexual relationship, it is in fine apposition to the view of George Gemistos Plethon.

This is the sinopia with ladies of many and wondrous hair styles watching the tournament.  I cannot say if the nameless princess is one of the ladies in the lower tier, or the upper.  I cannot say if the fresco was intended to portray Cleofe.  I cannot say if Pisanello ever saw her, though dates and routes of his various travels would have given him several opportunities.  I can say that I do most intensely hope so.


Some material and the black-&-white images are taken from Joanna Marsden-Woods' book,  The Gonzaga of Mantua and Pisanello’s Arthurian Frescoes (1998). The color images are from Luke Syson & Dillon Gordon, Pisanello: Painter to the Renaissance Court (2001).

Bonus picture: Compare the sinopia drawing of the lady's wreath with the hat worn by Camilla Parker Bowles on her wedding day to Prince Charles who is quite knowledgeable about art. 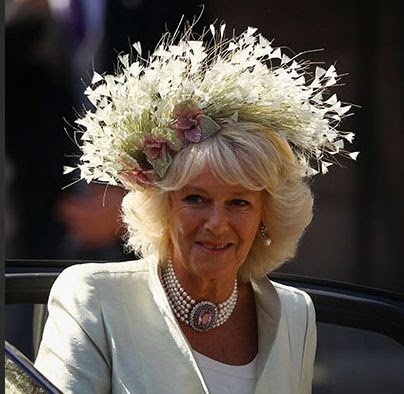 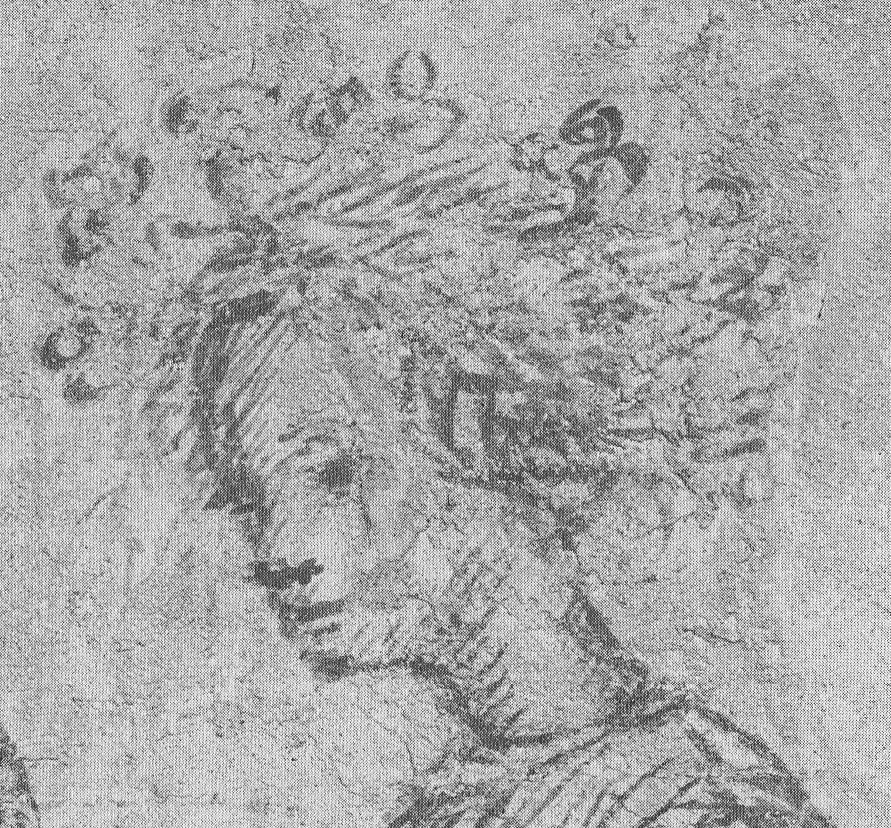