The Necessitous Inhabitants of Greece: Part One 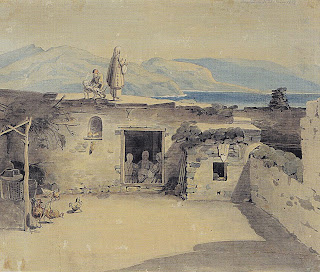 House on Aigina where Miller was based
"The ancient houses in this island are now all cleared from the dirt
and rubbish which filled them, and the earth is again peopled
with inhabitants, but in the most wretched condition."

In August 1828, Col. Jonathan P. Miller of Vermont published a book with the title The Condition of Greece in 1827 and 1828; Being an Exposition of the Poverty, Distress, and Misery to Which the Inhabitants Have Been Reduced by the Destruction of Their Towns and Villages, and the Ravages of their Country by a Merciless Turkish Foe.

Miller had been what he called "an unruly dissipated youth."  After a religious conversion while in the army, he left and went to the University of Vermont to study Greek classics. Coincidentally with the college buildings burning down and destroying his books, he learned of the death of Byron. He volunteered to fight for Greek independence, with the backing of the Boston Greek Committee, and arrived at Missolonghi in November 1824, the first American Philhellene.

He learned Greek quickly, and acquired a reputation as the "Yankee Dare-devil," fighting Ibrahim Pasha at the Battle of the Mills near Nauplion in June 1825. After the fall of Missolonghi in 1826, he returned to the States where he actively campaigned for Greek independence, lecturing and raising funds for civilian relief.  In 1827, he was sent by the Greek Committee to take a relief ship to Greece, one of 8 the States sent in 1827 and 1828.  Seventeen more embarked from Ancona in 1826 and 1827, sent by a Swiss banker, Eynard, and the Paris Greek Committee.

Miller's book reports the donations for which he was responsible. The donations of cash amounted to $36,209.30, the largest individual donations being for $100.  Many donations were in change, many were for 1, 3, or 5 dollars. It is impossible to calculate a modern equivalent.  Miller's donors include: John J. Astor, A Friend, A Friend to religion and humanity and a friend to the Greeks, A Lady, several identified as A Gentleman,A Mechanic's weeks work ($5), A Soldier of the American Revolution, and someone from a previous relief ship giving back the remains of his expense money.  Collections came from churches, schools and other institutions, including the NY High School, Eighth Presbyterian Church, German Reformed Church Christie Street, Pupils in a Select Male School, Proceeds of a Ball at the Park Theatre, Master Stone Cutters' Society, New York Typographical Society, and West Point Cadets.

Most interesting are the donations of goods.  A very partial list of individual gifts:
The Greek Committee's letter of instructions said, more than once: "You are aware that this cargo is the result of contributions made by benevolent individuals and associations . . . to the sole object of feeding and clothing the necessitous inhabitants of Greece.  . . . these are not designed to supply the garrisons . . . but are intended for the relief of the women, children, and old men, non-combatants of Greece."

Miller and his ship Chancellor arrived at Nauplion on the night of 23 May, and in the morning, discovered with delight that the US frigate Constitution was in the bay. [This lovely ship still sails, and can be visited in Boston harbor.]  After unloading some 160 barrels of bread and flour at Myloi, 60 for the Greeks in the hills, and 100 for the women and children who had escaped Missolonghi, Miller received a letter signed by Makryannis and several others ordering him to come to Poros to the current seat of the Greek government.  He left a large selection of supplies in Nauplion with Samuel Gridley Howe [much more about Howe in another entry] to distribute there. 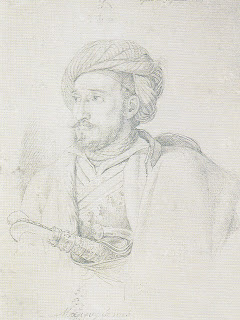 Miller went to Poros, met with members of the government, and was warmly welcomed.  He set about discharging his cargo, which was not easy, as there were no wharves, and everything had to be off-loaded onto small boats and rowed in from the Chancellor out in the bay. Makryannis immediately introduced Miller to families in need of help to whom he gave barrels of flour and pieces of cloth.

In contrast, Howe wrote to Miller that Kolokotronis and Grivas had tried to seize the supplies in Nauplion for their soldiers.  It took the authority of the Captain of the Constitution to force them to return the keys of the storehouse to Howe. 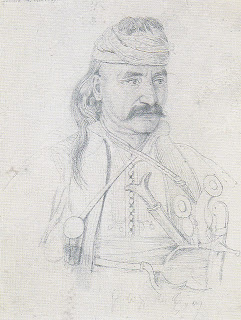 The efforts to distribute food and clothing to the needy with some fairness was constantly interrupted by attempts of one captain and another to commandeer supplies for his soldier or his family.  Miller was armed, known as a fighter, and did not hesitate on occasion to use force to keep control of the decisions.  His reports of his distributions are, for the most part, short and unemotional, but the cumulative effect is shattering: 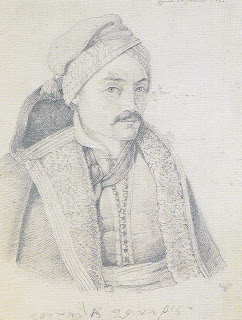 
The pictures here by Bavarian artist Karl Krazeisen  were used for the more familiar etchings.  The nuances of character which he conveys, and the youth of many of the participants, are lost in the etchings. They are from the collection of the Ethniki Pinakothiki-Mouseio Alexandrou Soutzou of Nauplion.

The Condition of Greece in 1827 and 1828; Being an Exposition of the Poverty, Distress, and Misery to Which the Inhabitants Have Been Reduced by the Destruction of Their Towns and Villages, and the Ravages of their Country by a Merciless Turkish Foe can be downloaded from Google books.
Posted by Nauplion at 5:00 PM