The Mocenigo War: Part One

In 1470, after Nicolò da Canale helped lose Negroponte to Mehmed II, Venice replaced him as Captain General of the Fleet with Pietro Mocenigo.  In 1474, after a series of military and diplomatic successes along the coast of Asia Minio and Cyprus, Venice elected Mocenigo doge.  One of the sopracomiti -- ship commanders -- Coriolano Cippico, a Dalmatian in his 50s, wrote an account of these ventures for Marcantonio Morosini, Venetian ambassador to Burgundy,.  Burgundy was theoretically an ally of Venice in this war that Pius II had got going -- he called it a crusade against the infidel but he died before the ships sailed -- and this document was most likely intended to encourage Burgundian participation and financing by reassuring them about the Venetian leader.

The document is printed in the 7th volume of Konstantine Sathas' invaluable collection of Venetian documents for 15th-century Greece which you can download here. Cippico's description of the stratioti seems to be the basis of the famous description Sanudo gave later.  Cippico writes:


The Venetians, in all the cities of the Morea that are under their dominion, have hired many Albanians on horseback, who are called by the Greek name stratioti.  These with their swift raiding have so wasted the part of the Morea that is under the Turks that is is almost a desert and a solitude.  These people are by nature intensely rapacious, and more apt to raid than to give battle.  They use a shield, sword, and lance; few have breastplates; the others wear a bombazine cuirass as protection against the blows of an enemy.  The most valorous of all are those from Nauplion.

Mocenigo's tactics were exceptional for that time: he took took the stratioti with the fleet, and not in roundships and towed hulks, but on the war galleys, carrying ten horses on each galley.  Depending on how many allies were sailing with him, this allowed him 400 mounted stratioti.  Without heavy, slower ships, he was able to attack with exceptional speed, which was increased by his having the fleet sail to its target by night so the attack could begin dawn.  Cippico describes that over and over in this account.  Mocenigo had certain principles: he would not attack Greek islands held by the Turks, because the residents were Christians, but only sites on the Turkish mainland.

After a brief description of an attack on the mainland opposite Lesbos.  Cippico describes the division of the spoils, a few comments in parentheses:


The stratioti brought the General the heads of their dead enemies, to have a ducat each, as the General had promised them: this has always been their custom.  The General loaded the galleys with the spoils, and came to a deserted island with good landings, between Chios and the mainland, which is now called Panagia.  Here were put all the spoils. Three arbitrators were selected from the sopracomiti, two Venetians and the third a Dalmatian, which is the custom always used in such circumstances.  The arbitrators, according to ancient Venetian custom, gave one tenth of all the spoils to the Captain General. (1/10)  The stratioti for their part kept two-thirds (6/10), and the arbitrators one-third (3/10).  The General had promised them this.  All the prisoners were consigned to the arbitrators: these were sold at auction.  (It appears from various reports in Cippico that slave dealers followed the fleet.)  The money was divided in this way.  First, all the soldiers who had brought in an enemy prisoner were given three ducats.  Then, the sopracomiti were paid for the expense of the stratioti's horses. The rest was divided equally among the galleys.  The galley of the provveditori was given double what was given to the other galleys.  The sopracomiti kept one third, and distributed the rest among the soldiers and oarsmen, according to rank.

The next division of the spoils was made on Delos, where Cippico noted columns, statues, remains of temples, an amphitheater, and a colossus of 15 cubits with the inscription

ΝΑΞΙΟΙ ΑΠΟΛΛΩΝΙ
The people of Naxos to Apollo
The next island episode was on Samos, :


Samos at present is a deserted island and has always been celebrated for its fertility.  Now it is full only of all sorts of animals, an abundance of woodland honey which one can find all around in the forests, and springs of sweet and living water that rise in all parts.  The horsemen and soldiers were disembarked to drill and refresh themselves.  The soldiers and others went hunting and while they were taking various prey, a youth of the Dalmatian nation and language encountered a bear of marvelous size.  The bear avoided his blow, went behind the boy and knocked him to the ground.  The boy, without losing spirit, jammed his fingers into both the bear's eyes and held its head so that it would not lacerate him, long enough for another youth of the same nation to kill the bear from behind with a sword.  On all sides there was a great killing of animals, and the whole army was employed in the hunt.  Several days were spent  in festival, with a great deal to eat and drink.  More than anyone else, the Schiavoni, of whom there were a great many among the oarsmen, sang drinking songs.  After everyone was sated, they boasted about the great deeds they had done, and how they had prospered so successfully against such vile men.

More from Cippico in another entry. 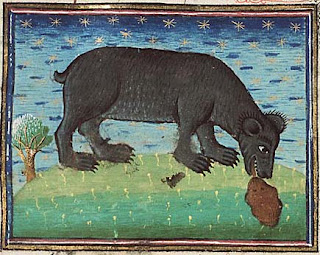 The top image is a detail from a Genoese tapestry of the Battle of Lepanto; the bear is from a medieval bestiary, and is actually licking her cub into shape rather than eating something.
Posted by Nauplion at 5:00 PM