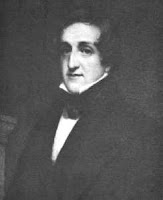 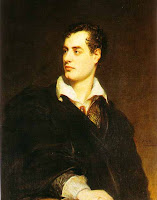 Fletcher is missing. There is no picture of William Fletcher.
Two hundred years ago this July, George Gordon, Lord Byron (left), and John Cam Hobhouse, Lord Broughton (right), were starting their travels in the Morea.

If you want the interesting things, read Hobhouse --it would make a great buddy-movie. Byron's reports in his diaries and letters are infuriatingly brief.  But something they both wrote about was Fletcher.  Fletcher was Byron's valet, but only in a technical sense.  What he was was their scapegoat.  Here is Hobhouse:

"We had only one English servant with us, who was my friend's valet; for I was fortunately disapointed the day before I left London, of the man who was to have accompanied me in our travels: I say fortunately, because English servants are rather an incumbrance than a use in the Levant, as they require better accommodation than their master, and are a perpetual source of blunders, quarrels, and delays. Their inaptitude at acquiring any foreign language is, besides, invincible, and seems more stupid in a country where many of the common people speak three, and some four or five languages."
And here is Byron (he had finally sent Fletcher back to England):

"I cannot find that [Fletcher] is any loss, being tolerably master of the Italian & modern Greek languages, which last I am also studying with a master, I can order and discourse more than enough for a reasonable man. ----Besides the perpetual lamentations after beef & beer, the stupid bigotted contempt for every thing foreign, and insurmountable incapacity of acquiring even a few words of any language, rendered him like all other English servants, an incumbrance. ----I do assure you the plague of speaking for him, the comforts he required (more than myself by far) the pilaws (a Turkish dish of rice & meat) which he could not eat, the wines which he could not drink, the beds where he could not sleep, and the long list of calamities such as stumbling horses, want of tea!!! &c. which assailed him, would have made a lasting source of laughter to a spectator, and of inconvenience to a Master. ----After all the man is honest and in Christendom capable enough, but in Turkey--Lord forgive me, my Albanian soldiers, my Tartars & Janizary worked for him & us too as my friend Hobhouse can testify."

They had started out with "a Tartar, two Albanians, and interpreter, besides Fletcher," but it was Fletcher who received the abuse: "Fletcher too with his usual acuteness contrived at Megara to ram his damned clumsy foot into a boiling teakettle." "That timber-headed Fletcher. . .." "Fletcher is fat and facetious."  Byron was not a very nice person in those years -- "I have kicked an Athenian postmaster" -- not that Athenian postmasters, or the postmistress at the Kolonaki postoffice in particular, don't on occasion trigger such an impulse.  But read Hobhouse again and see what Fletcher was up against:

"Our baggage was weighty; but, I believe, we could not have done well with less, as a large quantity of linen is necessary for those who are much at sea, or travel so fast as not to be able to have their clothes washed. Besides four large leathern trunks, weighing about eighty pounds when full, and three smaller trunks, we had a canteen, which is quite indispensable; three beds, with bedding, and two light wooden bedsteads. The latter article some travellers do not carry with them; but it contributes so much to comfort and health, as to be very recommendable. We heard, indeed, that in Asiatic Turkey you cannot make use of bedsteads, being always lodged in the khans or inns; but in Europe, where you put up in cottages and private houses, they are always serviceable, preserving you from vermin, and the damp of mud floors, and possessing advantages which overbalance the evils caused by the delays of half an hour in packing and taking them to pieces.
"We were also furnished with four English saddles and bridles, which was a most fortunate circumstance, for we should not have been able to ride on the high wooden pack-saddles of the Turkish post horses; and though we might have bought good Turkish saddles, both my Friend and myself found them a very uncomfortable seat for any other pace than a walk.
"Whilst on the article of equipage, I must tell you, that as all the baggage is carried on horses, it is necessary to provide sacks to carry all your articles. These sacks you can get of a very useful kind in the country. They are made of three coats; the inner one of waxed canvas, the second of horse-hair cloth, and the outward of leather. Those which we bought at Ioannina were large enough to hold, each of them a bed, a large trunk, and one or two small articles; and they swing like panniers at each side of the horse.
"Some travellers prefer a large pair of saddle-bags, and to have a large chest or trunk, which they send round by sea to meet them, or leave at one fixed spot; but this is a bad plan: the saddle bags will not carry things enough for you; and then to have your wardrobe at any fixed spot, binds you to one route, and prevents you from taking advantage of opportunities."
So if you are fortunate enough to be traveling in the Morea this summer, take a moment of silence for Fletcher.
Posted by Nauplion at 5:00 PM