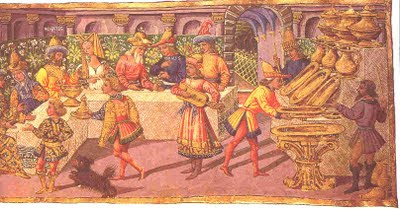 Late fifteenth-century Florentine painting from a series concerning
Jason and the Argonauts that makes great use of gilt and Byzantine headgear.
Immediately after 1453 the West decided that Byzantine meant serious status.

I want to talk about some Mistra-related assertions that have come my way.

It should be easy enough to identify: the genealogy gives Theodoros and Cleofe a son, two years before they began a sexual relationship, and it gives him the name of Manuel Peter. Manuel is fine: the first son gets the name of the father's father, but there is no family source for the name Peter either with the Malatesti or the Palaiologoi for the name, and the chance of a Greek rite imperial family employing the name is -- I'm guessing here -- highly unlikely.

In the years after the Fall of the City, it would have been easy for any well-spoken Greek to have invented a new name in Italy, and given the laxity in the Byzantine system of names someone who already had Palaiologos as one of his names could have given the wrong impression to someone.

PS.  Do NOT make use of this site for Palaiologan genealogy. A massive number of erroneous details just in the names I checked -- sons of Manuel II -- and no way to submit corrections. 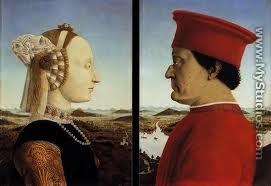 The other Battista, and her husband, Frederigo de Montefeltro

Battista Malatesta de Montefeltro was not one of Cleofe's ladies-in-waiting. She was the wife of Galeazzo Malatesta, Lord of Pesaro; daughter of the Count of Urbino; niece of Pope Martin V; correspondent of Leonardo Bruni, and one of the most literate and respected women of her generation. She was the aunt of Frederigo de Montefeltro, condottiere and great patron of Piero della Francesca, and the great-grandmother of Frederigo's fragile wife who was named Battista for her.

Despite the abundance of material on Battista (summed up here) to be found in writings on 15th-century humanism, she was curiously identified as Cleofe's "dame d'honneur" by Denis Zakythinos . Everyone else has mindlessly copied from Zakythinos: Runciman says,"one of her ladies-in-waiting", and elsewhere he adds "a cousin"; Ronchey, "dama di compagnia"; most recently, "μιά κυρία της ακολουθίας (πιθανώς εξαδέλφης την δέσποινας)" in Zēsēs Tsiopas dissertation, and in Dabrowska who goes so far as to say that Cleofe was "spied on by one of her ladies-in-waiting, her cousin Battista."


Possibly Zakythinos made his assumption based on the fact that Battista wrote a letter to Pope Martin V about the marriage problems of Cleofe and Theodoros. (He found the letter in Iorga.  The letter has been carelessly dated to 1421 or 1425.  It was certainly written in January 1427, at the same time as Paola's letter to the Pope on the same topic.)   It seems never to have occurred to anyone that the information might have been transmitted from Cleofe in Mistra to Battista in Pesaro by letter, or messenger, or gossip.  No one had a basis for assuming Battista's presence in Mistra. Zakythinos is a giant in the pantheon of Greek historians and can be forgiven. Information on Battista may not have been available in the 1930s had Zakythinos wanted to investigate Battista. The others cannot because they did not check out their source.