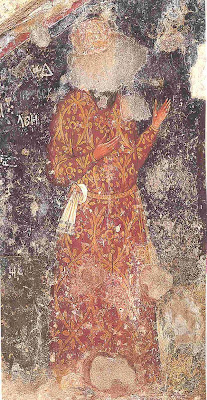 This court official of Mistra  is standing in for Demetrios Laskaris Asan.  He was known to the Venetians in Nauplion and Argos as Demetrios Laskaris, and to the Greeks as Demetrios Asan, and it has taken a while to figure out that they were the same person.  Demetrios was the kefali, or governor of Mouchli, one of the Byzantine border fortresses, and he was not one of the glories of Byzantium.
Mouchli is this great bald peak, to the left of the highway from Myloi to Tripolis, just at the point where you begin to come down out of the mountain curves.  It has the same configuration as the peaks of Mistra and Karitena, and it is completely isolated from the mountains that chain down from west of Argos. 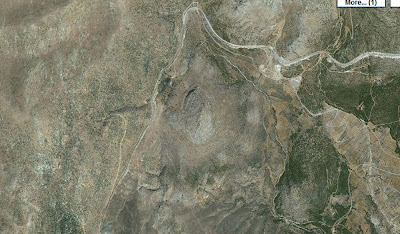 Mehmed II did not take Mouchli by blocking an aqueduct, as Kritoboulos claimed, because there is no place from which an aqueduct could have brought water to Mouchli. [Late correction: not Kritoboulos: Chalcocondylos.] There are still springs on the hillside, and they and cisterns would have been adequate for a city that probably never held even 2000 people.  Mehmed took Mouchli by a simple surrender from Demetrios Laskaris Asan because six years earlier he had already pledged his loyalty to Mehmed.

Little is left of Mouchli now -- this photo shows the most interesting remains, though there are considerable traces of walls made from the local stone and the same color -- but there was never much of Mouchli.  Twenty-five years ago you could still find traces of a fresco on a wall fragment of what is called the Mouchliotissa, a church of the Virgin. 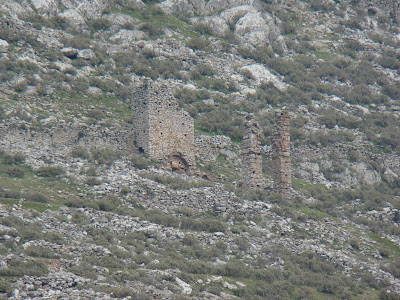 Like Mistra, Mouchli was a new city, founded for its defensive site at the end of a major mountain pass.  It was built by Andronikos Asan, Byzantine governor of the Morea between 1316 and 1322.  He was the son of Tsar Ivan IV of Bulgaria and Eirene Palaiologos, sister of Andronikos II who appointed him to the job.  Asan's daughter Eirene married John VI Kantakouzenos, whose daughter Helena married John V Palaiologos, which makes Andronikos Asan the great-grandfather of Manuel II and Theodoros I Palaiologos. From then until the final surrenders to Mehmed in 1460, Asans married Palaiologoi and held governorships.

It is difficult to think what would have supported the city of Mouchli, other than sheep and goats, and high-level brigandage --  waylaying travelers and merchants from Venetian Argos and Nauplion, raiding the Argolid.  We have evidence for both.  Last spring the apple trees were blooming across the hillside, and there is a nearby town named for pear trees, but fruit cannot have contributed much to the economy.

Demetrios Laskaris Asan was a difficult person.  Anonymous of Nauplion went to him in 1449 to complain about Mouchli Albanians rustling his animals at the Fair of Ag. Demetrios, and Asan's response was to imprison and torture him for two months, before sending him home.  (Another Asan at Mouchli did this to Nicolò Catello of Nauplion in 1399 when he went to clarify a financial matter.  The Venetian governor had to write to the Despot, Theodoros I, to get him freed.)

The Venetian community of Argos wrote a complaint to the Signoria of Venice about Asan, about what happened at the same Fair of Ag. Demetrios that Anonymous attended:

Also, about the Albanians who live in the territory of Your Excellent Signoria -- [Demetrios Laskaris Asan] orders them about and attacks and beats them, and takes them by force and imprisons them, and judges them in his way and says that they are his and not the Signoria's.

And he makes the Chief of the Albanian catuna pay 1 gold ducat for each hearth, for some two ducats, and for some three according to the families that he has. The said Chief is called the primicerio, and if he doesn't pay immediately, his cow or horse or sheep is taken, and he is put in prison. Because of this they ask the favor that they be protected so that they want to be under Your Signoria rather than under Greeks. La chiefali of Mouchli is named Dimitri Laskaris.

He came to trade at the Fair of S. Francesco at Kiveri, that was last Saturday and that he should favor our journey, for we wanted to go to Venetian territory for the one at Nauplion since I trade with him. And the Sunday of which Dimitri was at the fair we were making our way between Argos and Kiveri. He dashed past the toll post, and we were surrounded, and we were seized and we were unhorsed and were taken with an Albanian from Argos who came with us to bring the horses back.


And he strikes to the ground and inflicted much dishonor on Messer the Rettor [Perigrino Venerio di Bernardo], and has horses given to us, pretends to let us go on our way, and he sends a man to say that we would be held in Mouchli. And because of that Messer the Rettor sends the horseman to see what was going to happen to us, and thus he was held as well. And he has the horse of Messer the Rettor taken -- the poor young man went on foot -- as far as Argos, where he ate, and ordered taken the pigs of the brother of the Albanian whom he had in prison. And he sent the Albanian to take the horse of the priest-teacher and [he said] “Give it to me and then I will give you your pigs!”

Answer. We are writing the Lord Despot Demetrios [Palaiologos at Mistra] in the usual form to satisfy custom that he should see that similar incidents do not occur.

This is only part of a fascinating document, and it gives us a lot of subsidiary information, such as the fact that there was a Franciscan monastery at Kiveri [now Myloi], and that pigs were raised in the territory.  But this makes two serious incidents -- the Anonymous affair, and this last, really a cluster of incidents -- involving Demetrios Laskaris Asan of Mouchli and the Fair of Ag. Demetrios of 1449, and we have no reason to think he was any worse than a number of other archons of the Morea.  People who lament the fall of Byzantium might bear in mind that the archon business was a very large proportion of that civilization for all of its thousand years, in Asia Minor and in Greece.

Demetrios Laskaris Asan was acquired by Mehmed at the surrender of Mouchli in 1460, and then was the intermediary who arranged for the surrender of Demetrios Palaiologos, Despot of the Morea, and Mistra on 29 May. [Late correction: Mouchli was surrendered in 1458, and it was Mathaios Asan of Corinth who dealt with his brother-in-law, Demetrios Palaiologos, on Mistra.] He would have accompanied Mehmed when he returned to Constantinople.  It was Mehmed's practice to keep the nobles of conquered lands close to him so he could keep an eye on them, occasionally putting them in governing positions in other territories with other languages.  But we don't know what happened to him after 29 May 1460. [Correction: after the summer of 1458.]


This last dramatic view shows what Anonymous and the assorted prisoners and merchants saw as they looked to Nauplion beyond the distant mountains, with Mouchli on the right. 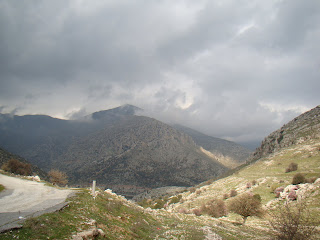