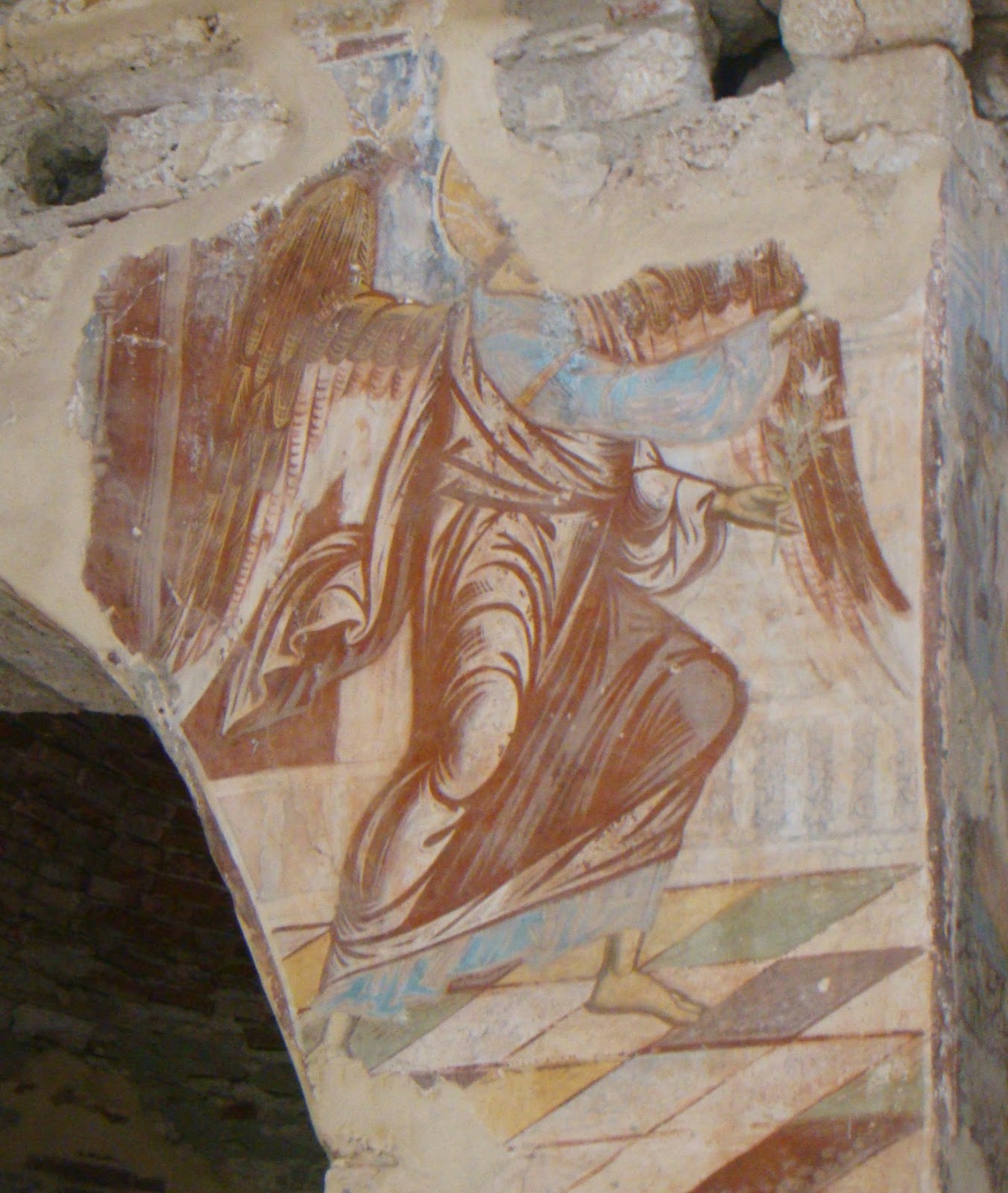 I recently discussed Bessarion's monody, one of four given at the μνημόσυνον for Cleofe Malatesta Palaiologina.  The memorial would likely have been held at Ag. Sophia, where she had been buried. There was a thunderstorm that day, and crowds of people -- family members, officials, clergy, women of the court, townspeople -- had shoved their way into the little church and its burial chapels and porches. There was a newly-painted portrait of Cleofe and her husband over her tomb, and some of the speakers gestured toward it and said, "You," as they spoke.  But we don't know which chapel the tomb was in.

I spent some time in Ag. Sophia at the end of October, standing in each chapel, trying to envision the circumstances, trying to consider how well a speaker could be heard from various positions. Most of the people present wouldn't have heard the speakers, and most would not have understood the Greek the speakers used: what was important to them was that they were there.

Hints in the monodies allow us to work out the order in which they were given. Bessarion's was the last. The first was by George Gemistos Plethon. What we have is probably not quite the speech that he gave, but his edited written text.

The magic name of Plethon has preserved this monody in twenty or so copies (one is bound with the only copies of the Bessarion and Cheilas): the other monodies survive in one copy each. Plethon's has been used, or parts of it, a number of times by a number of writers, for what it says about the soul. What has been completely overlooked is that Plethon's discussion of the soul comes from his portrayal of a very specific soul, Cleofe's soul, and then from his portrayal of her husband's.

Gemistos began quietly, speaking of Solon's idea of goodness, and how one could not be sure of human fortune until death. "For this reason," he said, "one would consider epitaphs and funeral addresses to be more reliable than any other encomia . . . for they are concerned with matters already securely established . . . The Athenians . . . thought it right to use these addresses."  Gemistos anchored the storm-blown mourners firmly in the Athenian tradition: "We, likewise, have come forward in this commemoration, not only to speak for our most holy ruler's now-departed wife who achieved a good ending to life . . . but expressing thanks for the reverence and understanding she always exhibited."

He then reminded them that Cleofe had come from Italy whose Romans had ruled the best part of the settled world, from the Danube to the Tigris to Libya to the Atlantic, and that she came from heroic ancestors.  "She came here, lovely and good, to dwell with our most holy ruler . . . bringing with her shining adornment of body and soul, for she was tall and lovely, and had matured into every sort of goodness. . . She, however, exhibited, in addition to the beauty of her body, which was radiant, an even more radiant and holy quality of soul, and showed that her body was a sort of image of the beauty of her soul."

This is an extraordinary emphasis on Cleofe's body, however beautiful, and it should be remembered that Plethon believed that physical desire was a divine gift, and that it was through the body that we become like the gods.

He went on to list the qualities of her soul and then followed them with a brief statement about each: "For she adorned it with every sort of complete goodness: judgement, discretion (illustrated by her “sober prudence in putting off her leisurely Italian ways and taking up the decorous restraint of our women”) , clemency, honesty, piety (illustrated by her worship with prayers and continuous fasting according to our custom"), married affection, and nobility, and having naturally acquired each from birth, she increased each through study and practice and proved herself a glory among women. (This discussion of qualities suggests that Plethon was working on Περι αρετων, "On virtues," earlier than generally thought.)

"Living in this manner, and with such occupations, practicing and studying, always adding more good to good things . . . and I would add that she recently took part in the most sacred of our feasts and our mysteries." He would have known as well as any of Cleofe's anguished "conversion" to the Eastern rite.  "She departed this life from an affliction beyond the powers of all medicine, so that she seems so dear to God from all these to have been taken up by God, and she left despair in her subjects . . .."

Leaving the subject of Cleofe specifically, Plethon went on to say that there is a part of us that is mortal, and a part that is immortal, the most important part. The body is a kind of garment, and when we take off this garment, it is wrong to mourn when the important part has moved into a better life. It is the life we live here that prepares us for that life, as did Cleofe's life, while a person who takes no care for the divine in this life will have no contact with it in the next.  Almost all people believe in this continuing life.  The creator, as a good master, would not have given us the longing for eternity unless there was an eternity to long for. Non-rational animals do not because they do not understand cause or infinity. The one who knows something about God must have something in common with him, and we could not know this everlasting life without a desire for it.

Then Plethon moves to suicide, a peculiar topic in the circumstances, unless he knew something that made this topic relevant.  Many of us who have been widowed have had the experience of being carried along at first, perhaps by shock, but with the sense that we are managing remarkably well.  Then about a month along, there is a great crash and an all-devouring depression.  It is clear, from Bessarion's monody, and particularly from Plethon's conclusion, that Theodoros had fallen deep into a depression, to the point that it had become a political as well as a personal problem.  He had earlier written a poem to Cleofe that looked forward to a radiant reunion in the presence of God.  Had he mentioned to Plethon the possibility of anticipating this?

It is difficult to think why Plethon would have otherwise brought up the subject, particularly in such public circumstances.  He explained that non-rational animals do not commit suicide because they cannot envision their non-existence.   Nothing seeks its own destruction, so a human would not consider suicide if it would have that result.  A person who is suicidal must feel that suicide just allows it to move out of the body.  Plethon clearly allows more understanding of someone who is suffering, than did -- and does -- church teachings.

Plethon concluded with a firm statement of comfort, correction, and encouragement.   Who else at Mistra could have spoken to the ruler so critically in public?  "If the belief is established as certain within us that the soul is immortal, we shall be nobler and better, and shall bear such losses more gently. And so, most holy ruler, consoling yourself with these words, give up despair, considering again that you were born to preserve the common good in the face of troubles, but despair will stand always in the way of such action. You see how the menace has progressed and requires great concern for recovery and return to safety. This rests on you, and only if you will take care of it appropriately will all the rest follow you so that, if God wills, we shall be saved.

"But, if you are indifferent, our danger will increase. Consider that if some mischief occurs—may that not happen—all will place the burden of it onto you, while if something happens to rescue us you will carry off the fame of it. So, understanding that you will in either of these cases have the greatest credit and, as your duty to God, who entrusted you with governance over us, stand before us, stronger and more attentive, and God will give you the diligence to be the rescuer of our community and provide you with whatever is necessary. And it has to be that, since your actions bringing us toward salvation will be great, and never trivial that, as well as by us, among all the rest of humanity you will be held in high esteem.

My thanks to Pierre MacKay for his work on the translation.
Posted by Nauplion at 7:40 PM