Neither at peace nor at home 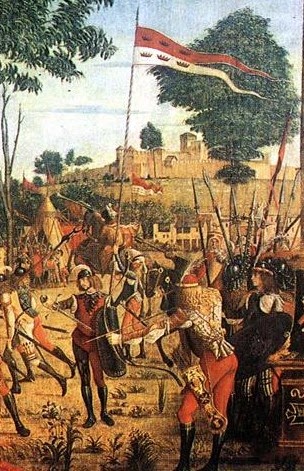 Alessio Sopracasa has found a remarkable source for the Venetian-Ottoman war in the Venetian archives. A single page contains a series of 18 dated entries covering 16 months – May 1467 through August 1469 – of the war. The identity of the writer is unknown, beyond the fact that he was a non-Venetian captain with a substantive number of foot and horse serving under him.

There is also a substantive amount of information in these mostly terse entries. If compared with the Barbarigo letters, it will be seen that the Italian foot and horse engaged in open battles and sieges, while stratioti did not. Stratioti for the most part do not come off well in these accounts, but this captain was asking them to do things they did not do. The battle of 14 August 1468 refers to Greek and Albanian gentlemen who did fight: we can probably name them. This is the only source I know for paying stratioti 1 ducat a head in the Morea, and for confirming the 15thC existence of mills at Mistra. Mistra was hard-hit by the Venetians: these 18 entries recount the destruction of the fields and vines in three consecutive years.

The article from which this information was taken, and the translation made, can be found here.

* * * * * *
1467
31 May. I rode with all my foot and horse across the alpe of Mistra and went to S. Niko, or Lacedemonia1, and won a battle and we burned it and got great booty.
4 July. I again crossed the alpe of Mistra and went to Gradiko2, a hostile fortress above the river towards Karitena, where we have agents inside. It was useless because they were double agents.
7 September. I went with the blessing of Christ to make an attack on Kalamata, formerly taken from your people, which no captain nor soldier of yours before me ever [dared]. I repaired it, fortified it, and held onto it, to the humiliation of your enemies and their confusion, and to the reputation and glory of your Most Illustrious Signoria.
1 November. I again crossed the alpe and rode against the Manassi3 in the territory of Zachonia, and took from them great booty and prey. We had Amar Bay at our backs for more than 20 miles and he was with us as far as the river of Longaniko.
1468
31 January. I rode to the plain of Lakkoi at Greveni, a hostile fortress, and gave battle. I was not successful and my contestabile, Zuan of Zara, was killed.
26 March. I went to Arkadia4 to keep the enemy occupied and confined, so that they would not go to attack the Magnificent Provveditor and our other people who were walling and fortifying Belvedere.5
6 April. I went to waste the grain and vines at Mistra, and then rode to Gardiki and made good prey.
25 ditto. I returned to Gardiki and gave battle at the borgo. It was taken by force and then I burned it.
2 May. There were 2 frambulari 6 with 500 horse camped at Goumero and Chelidoni, which they had surrounded and besieged so that the Greeks and Franks7 who were inside would lose. I rode to the area and forced/broke through the enemy. I crossed beneath Karitena, a very strong fortress of the Turks, and with great peril crossed into the valley of Liodora8, not yet touched or seen by Franks. I burned all that valley, about 40 towns, about 100 men killed, for whom I paid out of my money one ducat a head for the most part. That night I went to the top of the mountain and made an extremely large fire, so the enemy could see, and the enemy learned from their people of the burning of Liodora and of the dead, and seeing the fire would flee and abandon the siege, so that I made this attack, liberated the land, and got good booty which we took away safely.
2 July. I went to Mistra as far as the gate where a number of enemy, and also our men, were killed. We burned the mills and wasted the area.
20 July. I went to Leondari against the Potamitti9 about whom we had intelligence, and returned them to the obedience of the Most Illustrious Signoria, with their families and property.
14 August. The Turks were at Kalamata. Sinan Bey, the frambularo, came to confront me with 4000 horse. All your stratioti fled to Mantegna10 except a few leading Greek gentlemen and Albanians who remained with me. We fought hand-to-hand for five hours, and wounded and killed a great many of them, which we did through the grace of God. The Magnificent Miser Iacomo Loredan was at the port, and if the stratioti had stayed I am convinced we would routed them.
5 November. I rode to Gardiki, a hostile fortress. I took the borgo by force and burned it.
1469
20 April. I went back to Gardiki, which had an agent inside, and it was handed over by this agent.
31 May. I went back to Mistra to lay waste the grain and fines. We raided up to the gates. A number of janissaries (Zaniceri) were killed, also of ours.
15 June. I rode to lay waste to Arkadia, and we went as far as the mills of S. Elia. I stopped there because your stratioti did not want to go on.
July. I went to take Castel Leone.11 I took it and fortified it.
1 August. We went to the attack at Vostitza (Augustiza) with the Magnificent Captain-General12 and the Magnificent Provveditor, and took it. The aforementioned signori and your Magnificent Sopracomitti13 saw my work and my men's.

Thus, I have been neither at peace nor at home.


1The convent of Ag. Nikon at Sparta.
2Gardiki.
3This is intriguing: at least 5 Manassi, or Manessi, were kapetanioi of stratioti for the Venetians. There is a fine icon in S. Giorgio dei Greci in Venice with portraits of three Manessi.
4Kyparissia.
5Pondikokastro. The Provveditor of the Morea was Paoli Priuli.
6Also flamburari = Ottoman provincial governors.
7Italians. “Franks” was a generic term for westerners of the Latin rite.
8Near Isova, between the right bank of the Alphios and the left bank of the Ladon.
9Like the Manassi, a clan of Albanian origin. The name appears in the Ottoman cadaster of the early 1460s at Kalavryta and Vostitza.
10On the coast near Kardaymyli.
11Just inland from the coast, halfway between Koroni and Kalamata.
12The Captain-General was Nicolò da Canal.


13Commanders of the individual ships.
Posted by Nauplion at 7:47 AM