Bessarion on the imperial hangers-on 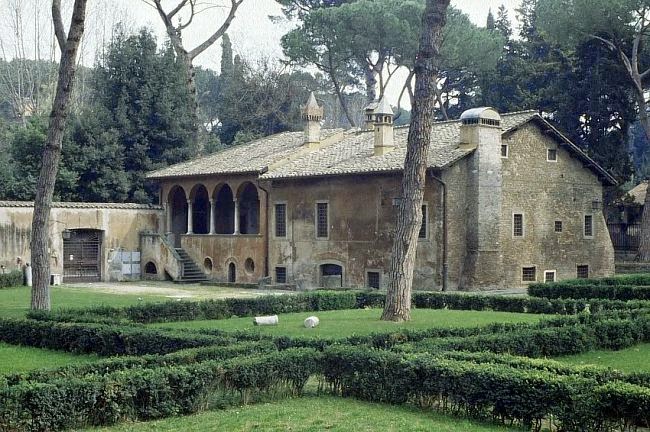 Bessarion's villa (possibly) at Rome near the Via Appia.

In Bessarion's letter about arrangements for  Zoe, Andreas, and Manuel Palaiologos, he said that the Pope was providing 300 ducats a month. Two hundred of that was for their servants, food, horses, clothing, and other expenses. The remaining 100 was for the household.

The household was what would have been their court somewhere else -- a few useful people, a few whom they knew and actually liked, and hangers-on to whom there was some familial obligation.  Bessarion was quite stern about this. Their father Thomas had had 300 ducats a month for his household from the Pope, and another 200 from Bessarion and the cardinals, but Bessarion and the Pope had still been quite shocked to learn how large a group Thomas had been supporting out of that. (They had also been amazed at the size of John's household when he came to Italy twenty-plus years earlier on the trip that the Pope was also paying for. ) When Thomas first visited Rome it had been noted that he was accompanied by a suite of 70 people, all on borrowed horses, except for the three that he owned. John, too, had been noted for his lavish household.

It was not going to be this way for the children.  There was no way Bessarion and his colleagues could come up with the contributions they needed for the authentopoula -- that is the term in the letters for the children -- if people saw the household as a Greek immigrant fraternal welfare association.  Bessarion wanted the administrator to select a few reliable people who could provide the authentopoula with good support, good service, and honor.

He wrote the household administrator in Ancona about financial arrangements on 6 August. That's 305 kilometers on modern roads, 3 hours driving now at best.  Then it was two days in one direction for a fast messenger. The household administrator was to settle the financial arrangements for the people who were to be the authentopoula's court.  It is obvious that a great many people who had planned on sinecures were sorely disappointed. Various people in Ancona sent a stack of letters in reply. On 16 August Bessarion wrote letters in response to these.  Two of these letters survive, very irritated letters.  He says, "The grace of God be with you," four times in two letters but you can hear that he says it between clenched teeth.

The first is to a group of three men, apparently the core of the court, and probably people Bessarion knew.  They had sent along a list of the other members of the court, and how much money each was to have. They reported that there were many complaints. Bessarion approved this list and said that the others  had  to understand that there is no more money.  Period.  They had written him saying they were sure he would fix things. He would write them a general letter and tell them that there was nothing he could fix.  He wanted this clearly understood and he wanted them to quit burdening him.

Bessarion had been physically unwell for several years.  He was burdened with trying to find support for the Pope's crusade in the Morea that was going very badly:  most of the Italian troops and the Venetian commanders had died of plague, they were inadequately supplied, they had lost the control of the country they had a year before, and the Turks had pushed the crusade troops down into a small pocket in the south.  He had been personally supporting a large number of refugees from Constantinople and the Morea and finding jobs for them.  He had no energy left over for whiners who claimed entitlements.

He wrote them that they had accepted the amounts offered, that they had agreed to serve the authentopoula, and that they needed to stop making words about the matter.  The Holy Father was not sending any more money.  God knows he personally would like to be able to help, but -- we have said this many times -- it cannot happen.  He repeats all of this several times. Frustration runs off the page like sweat.

We have no real indication of who some of the members of that household might have been, with the exception of a Demetrios Rallis Kavakes who went with Zoe to her Moscow marriage seven years later. There were certainly other Rallades, first and second cousins, who had accompanied the family when they left the Morea in 1460. For generations the lives of these household hangers-on had been financed by their relationship to the imperial family.  Bessarion knew clearly what they were afraid to admit: the Empire is over.

Email ThisBlogThis!Share to TwitterShare to FacebookShare to Pinterest
Labels: Bessarion