What happened to the children?

Detail, icon of S. Georgio dei Greci, Georgios Klontzas, 16th C.
Istituto Ellenico, Venice
I have already written here about the ability of the Palaiologues to lose close members of the family, in this case the children of Manuel II's brother, Theodoros, Despot of Mistra, not to mention Manuel's own daughters.  There are more misplaced children, and Manuel's grandchildren, too -- the children of his son Andronikos.

That would be poor, sad Andronikos, Despot of Thessaloniki, who died young of leprosy. He was Despot from the age of 8, in 1408, until 1423 when he handed the city over to the Venetians with the hope that they might defend it better than Byzantine resources could.  He seems to have gone to the Morea for a while, then to Constantinople where, in the family tradition, he became a monk in the Pantokrator, and died at the age of 28, in March 1429.

A. Sideras, in "Neue Quellen zu Andronikos Palaiologos," in Byzantinische Zeitschrift 80 (1987) 3-15, has found more information on Andronikos than anyone imagined existed, and it isn't very much.  What interests me here is a footnote with a scrap from a manuscript in Moscow that says:

. . . for your sons (παισὶ) this has been sorrowing loss, over your absence and their separation from one another as they were scattered here and there . . .

One of the children has been identified as John, and the John Palaiologos whom Cyriaco of Ancona met in Mani has been stated to be the son of Andronikos. Because of the ages and additional genealogy, I believe Cyriaco's John to be the son of Theodoros I.   But what happened to Andronikos' John and his brother?  Were there more than two children.  Why were the children scattered?

It is not clear in that excerpt -- which is all Sideras gave me to work with -- whether the scattering was after Thessaloniki, or after the death of their father. Did no one in the family have any regard for them? Constantine probably did: he was the one for whom we have any record of family affection. It is certainly asking to much to wonder what happened to their mother.  Or mothers.

No chronicler or historian thought any of this information important to record. We are told that Byzantines, like other people, loved their children.  Of course they did, but we have precious little evidence for it outside of the wonderful essay Psellos wrote on his daughter.  If we go by the pictures they left, the Byzantines for the most part thought children were short, deformed monsters, as in the Klontzas icon above.  Look at these two fresco details from the Pantanassa at Mistra: 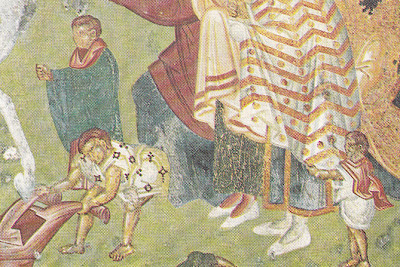 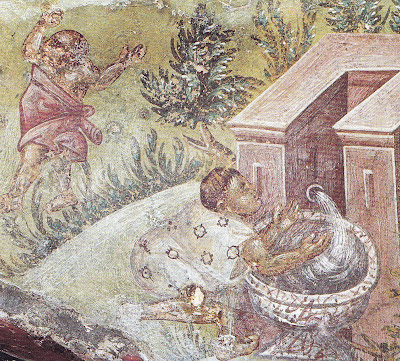 Seldom do we find a child appropriately proportioned to an adult:

The more time I spend with the Palaiologos family, the more I see of civil war, to the end and well past the end, and the hiving-off of young children. The family models the history of the late Byzantine period.

Don't miss Mothers and Sons, Fathers and Daughters: The Byzantine Family of Michael Psellos, by Anthony Kaldellis (Notre Dame Press, 2006).
Posted by Nauplion at 8:00 AM