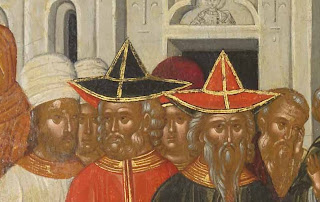 When Manuel Palaiologos came to the Morea in 1415, he brought with him a doctor, Demetrios Pepagomenos who served as a secretary. This Pepagomenos, a correspondent of John Chortasmenos, is said to have also been a correspondent of John Eugenikos and Bessarion. This Pepagomenos is further identified as the Demetrios Pepagomenos who delivered a monody on the death of Cleofe Malatesta, the wife of Theodoros II, and an author of at least four medical treatises. I resist the idea that these are all the same individual. I cannot definitively prove otherwise, although I can try.

In Mazaris' Journey to Hades, composed in 1414-1415, Mazaris encounters a Dr. Pepagomenos in Hades and has a long conversation in which Pepagomenos mentions two of his his sons -- Demetrios ("Lizard-Eyes"), also a doctor, and the highly ambitious Theodosios ("Little Shit"). Mazaris makes a good deal of humor out of Pepagomenos once poisoning himself, and refers to his stopping bleeding with the herb ox-eye (βοόφθαλμον). The significance of its being mentioned at all lies in the fact that a Demetrios Pepagomenos made a collection of "folk" remedies.

The Pepagomenos of my interest was a man of wide-ranging curiosity and great empathy, loving, and much-loved by his friends. He wrote a famous treatise on the treatment for gout, which was translated into Latin and printed in 1517 and reprinted as late as 1743. He is an easy writer, concerned for his patient's pain (he used opium, and colchicine, still the drug of choice for gout pain), frequently writing, "Δοκεῖ μοι" -- "it seems to me." He also made a collection of folk remedies, wrote treatises on the feeding and medication of hawks, and on dogs. He seems to have become the court doctor, and to have attended Cleofe's childbirths.

Chortasmenos' letters can be clearly dated to 1414-1415, when their addressee was in the Morea with Manuel II. One of the letters comments on problems that Pepagomenos had had with a patient. Dating the Eugenikos and Bessarion letters is a little more chancy. Their addressee, the doctor and writer Pepagomenos, was most likely to have met Bessarion at Mistra, where Bessarion was only between 1433 and 1437.  At the time of the letter from Bessarion, Pepagomenos' wife has given birth while they were away. It is  possible that this absence, or the first absence, can be identified with some specificity.

On March 25, 1436, the despot Theodoros II arrived in Constantinople on the ship with the bride for his brother Demetrios. Theodoros had come to Constantinople with the intent of remaining as successor to the throne. Four years earlier, his brother, the emperor John, had had a long period of extremely painful and paralyzing illness, possibly an aggravated chronic rheumatism, with extreme muscle weakness, if not actual paralysis.

Accounts from 1437 through 1440 give similar descriptions of a fugitive illness which was diagnosed as gout. I suggest that John had had another grave episode, and of course Theodoros had great familiarity with the family gout, having watched his uncle Theodoros I in his illness and death. A letter from Bessarion to Theodoros while he was in Constantinople remarks on the grand procession with which John had honored Theodoros, and acknowledges that Constantinople had made a great deal of him. Theodoros had found himself quite popular. Bessarion and Scholarios both comment on what a good talker he was -- they seem to suggest discourse rather than conversation -- and, of course, perceived proximity to the throne contributes greatly to popularity.

Theodoros had taken with him an elaborate epitaphios for the tomb of his parents (though his mother was still living) with double portraits of both and sixty-some lines of poetry, all embroidered in gold. I believe he took another present. He took Pepagomenos, the great specialist in gout and treatment of pain. Pepagomenos' treatise on gout is dedicated to "the emperor," and although the emperor is unnamed and the dedication gives no hint of identity or of illness, I suggest that Pepagomenos dedicated his treatise to John. There is no evidence of this, only coincidence, but a great deal of Byzantine history is written on coincidence. I also believe that Pepagomenos was unwilling to leave his pregnant wife in Mistra without good medical care and took her with him to Constantinople where his skill did save her life and that of their child. It was a boy: Bessarion's letter tells of the delight when they learned about it in Mistra.

Bessarion's moving letter compliments him on the survival of his wife and son: Pepagomenos had written Bessarion about his concerns, and then Bessarion praises the exceptional -- equal -- relationship between husband and wife. But there is another aspect to Pepagomenos writing Bessarion about those lives saved from a dangerous childbirth. They had both spoken at the memorial for Theodoros' wife, Cleofe, who died in childbirth, together with her child -- in Pepagomenos' care. Both friends had shared a specific and terrible loss, which could not have been away from their minds with this new pregnancy.

And the warmth and affection of Bessarion and later of Eugenikos for Kyria Pepagomeni and the boys contrasts strikingly with the fact that Theodoros has left in Mistra his eight-year old daughter, Helena, and has no intention of returning. Perhaps he thought John would die soon, he would become Emperor, and he could then send for her, but her later life was not the life of a person who had received much affection as a child.

It fits with what we learn of Pepagomenos from these letters that it was he who gave Helena, "your dear child who weeps for you bitterly," more than a bare mention at her mother's memorial -- "Your beloved daughter mourns you, bereaved of her dear mother at so young an age, at a time when she most needed you, and required your instruction and advice, who have left her with no maternal consolation."  He was the one who described the quality of companionship in marriage that Theodoros and Cleofe had achieved, who described Cleofe  visiting the poor, taking firewood, and fixing food for them -- "taking no account of the heat of the fire, the intense burden of the smoke, and the inescapable duration of this service," giving assistance to widows and strangers. He was the one who noted that Cleofe made marriages possible for women of the court.

While Papagomenos was away on another trip, he left his sons with the Eugenikos family.  John Eugenikos is said to have been at Mistra between 1439 and 1447, which somewhat suggests a date for the trip. (Cleofe and Bessarion were gone when Eugenikos arrived: his presence must have been a great joy to Pepagomenos and Theodoros.) A manuscript in Pepagomenos' handwriting, containing his own writings and others that he copied -- surely in Constantinople -- can be dated by the watermarks on the paper between 1437 and 1444, which focuses the date a little more.  His wife was with him on this trip, too.

John Eugenikos compliments the excellence of two boys, calling them "that pair of ours, and especially Nicholaos" (there was a remarkable and brilliant Nicholaos Pepagomenos in Constantinople in the 14th century), and then he compliments their mother's excellence and intelligence, and again, the relationship between husband and wife. In another letter, Eugenikos describes a group that he had invited to hear a new letter from Pepagomenos that had brought spring to their winter. (This is a topos in Byzantine letters, but that does not mean that it was not winter.)  He included "our good Nicholaos" and his friends in the audience -- it looks as if Nicholaos was the older son. (I think -- can't prove -- that the younger was Giorgos.)

Everyone was tremendously enthusiastic about the letter (this is a topos in Byzantine letters, too),  then Nicholaos and his friends took the letter, "treating it lovingly," and tried to work it out for themselves. Their Greek had not yet become Byzantine. It is an appealing glimpse of Mistra life, the circle of friends including the boys in their reading. All three of these letters reveal a warmth in relationships that -- if it existed -- is concealed in the pompous oratory and discourses on Athenian history and the Muses in the letters of Chortasmenos. These are letters from different generations, from different cultures. (Chortasmenos taught Bessarion in Constantinople: the generation difference is clear.)

[LATE NOTE: I have learned that Eugenikos was not in the Morea between 1430 and 1440, so if Theodoros took Pepagomenos to Constantinople in 1436, the boys were not with Eugenikos that year.]

Unusual for a name that shows up over and over, Pepagomenos seems not to have been a name involved in political matters, or representing one court or another in the West, and mercifully he left no letters of advice to emperors or disquisitions on the Procession of the Holy Spirit.  He hasn't left any letters at all, which is only to be regretted. He seems to have died about 1450.

I have several publications on my desk on Demetrios Pepagomenos.  I have the PLP and the ODB which give the bones.  I have four articles that discuss the manuscripts associated with the medical writer Demetrios Pepagomenos, and I needed those articles, particularly the splendid one by Lazaris,* to overcome my unhappiness at finding an important source described as "oral tradition." I have the Greek, Latin, and French versions of his book on gout, and the Greek of his collection of medical cures.  Assorted texts mention him as one of the intellectuals at Mistra. Nothing considers him as a human being and an exceptionally humane one.  But if you look at the character of Demetrios Pepagomenos, Bessarion, and Cleofe, you could really believe that for a brief shining hour, Mistra lived an ideal.