The Bride had dinner at Ragusa 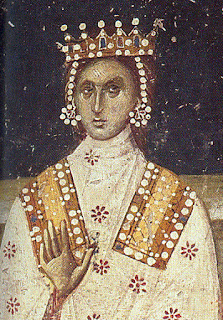 When the fifteen-year old Helena Palaiologina sailed for Ragusa en route to her marriage to Lazar Branković of Serbia, she had wanted to stop at Corfú.  That stop and, in fact, the whole trip seem to have provided occasion for a great deal of fuss.

In anticipation of her imminent arrival, the Ragusan council worked out the details for her formal reception:

A committee of five nobles would meet her at Cavtat, a short sail south of Ragusa.  The rettor* and the Minus** would meet her at the port. She would be led to the rettor's palace.  (This was the Italian style of welcome: had she gone to Constantinople as a bride, she would have been met by the court ladies.) The ladies of Ragusa -- that would be the upper-class ladies -- would greet her in front of the church of the Virgin.  Housing would be supplied for her entourage, and for the contingent that her father, Thomas, had sent by land (no word on the sizes of the entourage or contingent).

A committee of five would be appointed as her escorts.  The rettor would dine with her once.  A committee of three would be appointed to see to the furnishings of her suite and to her provisions.  There would be an allowance of 50 hyperpers a day for food: "bread, wine, meat, poultry, wax, sweets, and other necessary things."***  Live animals and poultry would be provided so they could be prepared as she preferred. (No word as to whether she was bringing her own cook.)

Someone was to buy at Venice, for a wedding present, twenty "arms"**** of crimson velvet, and ermine to the value of 300 ducats.  The bridegroom, Lazar, was to have a gift of 300 ducats worth of cloth from Mantua or Florence.  Arrangements were to be made for the bride to invite the gentlewomen of Ragusa to the palace to dance, and then dine.

Measures for the security of Ragusa would be taken.  Thomas, Despot of the Morea, having invited the Republic of Ragusa to be represented at the wedding: Ragusa would send two nobles.
This is all the information I have found, but I have questions.

Presumably there were interpreters.  Had Helena learned Italian from her mother? Did she have western clothes, or was she dressed as a Greek.  Had Thomas ever had a party or a dance -- how was she to know how to act with these ladies she was to entertain?  How long was she to stay in Ragusa before going to meet Lazar?  And so on . . .

For the picture here, I am reusing a bride who has already sat in for another young woman, there being a vast shortage of contemporary images of Byzantine brides, fifteenth-century galleys and fifteenth-century Ragusa.  Contributions from readers would be appreciated.