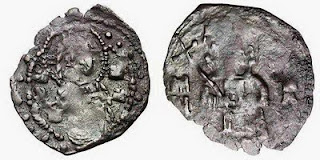 The single coin issued in the Morea by Manuel II Palaiologos.

Manuel Palaiologos and his wife Helena had ten children recorded for history by Sphrantzes. Their first Constantine and two daughters died in Monemvasia, of plague.  Later, the infant Michael died in Constantinople, also of plague.  After him there were two more sons, for a total of six sons, which augured well for the future.  But.

John had no children at all.

Theodoros had one daughter who lived to adulthood and who had daughters of her own. A second child, probably a son died before birth, with his mother.

Andronikos never married, and died in his 20s.

Constantine fathered two children who died before birth, with their mothers.

Demetrios had a daughter who eventually ended up in Mehmed's harem as a hostage for his good behavior.  She died there.

It was left to Thomas, the youngest.  His first child, Helena, was married to in 1446 to Lazar Brancović, later Despot of Serbia. Helena and Lazar had a daughter, Helena, the next year.  More than twenty years after the birth of Helena, and after the birth of their grandchild, Thomas' wife Katerina gave birth to a son in January 1453.  We know almost nothing about Thomas during those twenty years, but from the way he treated Katerina's brother, his relationship with her cannot have been a particularly pleasant one. The boy was not called Manuel after his grandfather in approved Greek fashion, but Andreas after the patron saint of Patras, one of Thomas' two capitals.

So at the time of the fall of Constantinople, in 1453, Manuel's heirs consisted of a baby boy, and two granddaughters and a great-granddaughter all named Helena after his wife.

It was in 1453 Thomas went to war against Demetrios who had been panting for the throne for years, and who had tried to take it from Constantine when John died.  Thomas may have thought a son gave him a certain weight in the inheritance stakes.  A second son was born in 1455, this one called Manuel.  Thomas fought for control of the Morea, tooth and claw, fire and axe, until he was forced to make his escape in the summer of 1460.

Thomas died in 1465, having learned that the "crusade" begun the previous year that promised to retrieve the throne for him was a disaster.  He had not seen his children since leaving them in Corfu in 1460 -- their mother had died in 1462 -- and he had written asking that they be sent to Rome.  He had just time enough to learn that they had arrived in Ancona.

Cardinal Bessarion brought young Andreas, Manuel, and their sister Zoe to Rome where he established a household for them, and arranged for their education -- Zoe was to have the same education as her brothers.  Weary Giorgios Sphrantzes visited them the next year -- "Lord Andreas, the despot, and Prince Manuel, my masters"-- and stayed for a month.  Andreas was 13, Manuel 11. There is much that Sphrantzes could have told us about that visit, much that he could have told the children to give them some sense of their family.

One thing that strikes me in this narrative is the way the effects of nature reflect the process of history.  The brothers Palaiologos might have been expected to produce at least six or eight grandsons for Manuel.  There was one infant male in May 1453.  One could have simply kept track of the children and known there was no future.
Posted by Nauplion at 7:57 AM