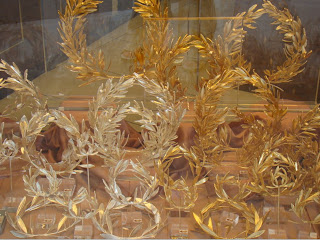 Wedding crowns, Athens
Last night when I was not sleeping, I found myself thinking about the marriages of the sons of Manuel II Palaiologos.  A fairly dismal subject, on the whole, with a great deal of waste and grief on all sides.  It is an article of faith that Manuel received a letter from Pope Martin V giving permission for his sons to marry Western rite brides, and this is demonstrated by showing that in August 1420, Sophia of Montferrat and Cleofe Malatesta of Pesaro were shipped out as the first lucky candidates. (By the way, none of these women married to the Palaiologos sons was a princess: enough of the "Latin princesses" theme.) There is a vast wasteland of articles on the marriages of the sons of Manuel II, and having recently written on this topic myself (with more to come), I think it needs re-evaluating.
The marriages of John VIII are no proof of this Western rite theme.  When he was 21, in 1414, he was presented with a child bride in the person of Anna of Moscow.  She died of plague three years later.  He had been so detached from her that he did not learn of the event for another year.  Then there was Sophia of Montferrat.  John left her a bride unwedded, and she left him after nearly six years.  This cannot be considered a Western rite marriage. When he remarried in 1427, this time blissfully, his bride Maria was from Trebizond and of the Eastern rite.
Theodoros II of Mistra married Cleofe Malatesta in January 1426 and he, too, left her a bride unwedded.  After six years, he decided to be married after all and pressured her -- despite a written promise to the Pope -- to convert to the Eastern rite.  She assured her family that this was an outward conversion -- "I have not become a nun just because I have been anointed with a little oil." -- and spent the next six years doing penance for her act.  This, too, cannot be considered a Western rite marriage.
Constantine's two marriages were both to Latin rite women, and both of them died during pregnancy.  Both women, Theodora Tocco and Caterina Gattilusi, were from families that had lived in Greek-speaking lands for generations, and both were certainly bilingual.  From what we know of these Latin-Greek families, their choice of rite was fluid, and they were at home in both.  Neither of these marriages was arranged under the papal dispensation and there is no information as to any observation of any rite.  Theodora was part of the territorial settlement concluding the Palaiologos conquest of the Tocco territories in the Morea. Caterina's family was related to the Palaiologoi and she was chosen for her suitability.
Moving on to Demetrios, both of his marriages -- to Zoe Paraspondylos and to Theodora Asan -- were in the Eastern rite.
Which leaves Thomas.  His marriage to Catarina Zaccaria in January 1430 was, again, outside the papal dispensation and part of the territorial settlement in the peace treaty by which the Palaiologoi acquired the Principality of Achaia and added 50% more territory to the Despotate. She might have been considered a princess, as her father was known as the Prince of Achaia, but no contemporary document calls her that.  Sphrantzes calls her "kyra." The marriage was celebrated at Mistra.  It is highly unlikely that the ceremony was in the Western rite.
All of this means that, instead of forcing the marriages to fit that letter from the Pope, one should look at what actually happened.  Or didn't happen.
Posted by Nauplion at 5:59 PM