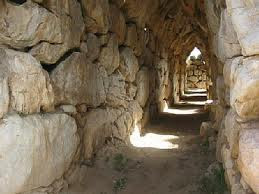 One of the galleries at Tiryns, Minio's Castellazo.
On 9 October 1480, the Greek kapetanios Krokondelos Kladas led a company of stratioti out of Koroni in a private war against the Turks in Mani. He carried a Venetian banner, to give the impression that he had serious backing, and he acquired Greek, Albanian, and Italian supporters as he went. Mehmed II wrote Venice that he knew they had nothing to do with it and sent two different military expeditions to bring Kladas down and punish his accomplices.
On 15 December, Captain-General Morosini of the Venetian fleet reviewed the troops in Nauplion -- he had already done this in Methoni and Koroni -- and fired most of the Greek and Albanian stratioti or reduced their ranks, without their back pay. In peacetime Venice had no need for so many troops. When they protested, he demoted some and had others beaten. One of the leading Albanian kapetanioi, Thodaros Bua, stormed out with some 60 followers. They attacked Turks farming outside Argos, killed three, and went south to join Kladas. (See Letter 23.)
Ottoman reprisals were terrific, towns were burned, hostages taken, a few prisoners sent to Constantinople where they were cut to pieces. The impression from the documents is that it was not those responsible who received the brunt of the punishment. Kladas and Bua fought over control, Bua pulled out. Avoiding the dragnets across the Mani, many of the rebels made their way toward the borders of Koroni and Nauplion territory and started operating as bandits. Nauplion's provveditore, Bartolomeo Minio, banned the bandits from entering Nauplion territory and prohibited the sale of their goods. Nicolò Navagero, did the same for Koroni territory. This was their only defense when they could not lay hands on the guilty.
In early March, Bua got in touch with his cousin, Ismail Pasha, voivode of Karitena (who had taken troops across Mani) and asked for pardon. On the 12th Ismail wrote Navagero, provveditore of Koroni, proposing that both sides grant mutual amnesty -- he knew Navagero well after spending three weeks with him the previous fall in negotiating the territorial boundaries, but Navagero replied that he was unable to take such an action. Bua, taking pardon for granted, went into Monemvasia where he was immediately recognized and jailed.
In April, Kladas abandoned his followers, perhaps a day before certain capture near Porto Quaglio, sailing away on a ship belonging to the King of Naples on which there was someone he knew. For nearly a year, what was left of the revolt remained in a limbo, with some of the rebels hiding in the mountains, some looting and attacking Turks.
In January of 1481/82, Ahmed Beg, the new Ottoman governor or sancakbeg, arrived in the Morea. On 13 February, he -- with 300 horsemen and his personal staff -- met Bartolomeo Minio -- with 500 horsemen, 200 foot, and half of Nauplion -- at Castellazo. Then the two of them, each with five attendants, withdrew to talk. After issues of mutual interest had been discussed, and much good will exchanged, Ahmed Beg took one of the voivodes as a translator, Minio took his secretary and his translator, and the five of them talked privately.
I chose the picture above of one of the galleries at Tiryns, as it seems a most likely place for them to have talked. It offers shelter from the February chill, and privacy.
Ahmed Beg said that he wanted to put the matter of the revolt to rest. One of his voivodes who was related to the Busichi clan, and Ismail Pasha, had been working on it (or maybe the voivode and Ismail were the same person), and he asked Minio if he would share in a joint pardon.
Minio said that he himself did not have the authority to pardon rebels against the Signoria, people who had violated their peace agreement with the Ottomans. Ahmed urged him again, saying that if he -- the offended party -- was willing to forgive them and Venice was not, it could be taken that they were willing for the rebels to continue. Minio saw his point and said that he would write to the Signoria.
It was agreed that, until they had the Signoria’s response, the rebels were to withdraw and remain quiet. The voivodes and some of the kapetanioi said they would speak with their rebel relatives and asked for three days to get an answer. By the end of the three days, the kapetanioi brought word that Mexa Busichi, Elia Sagan, and Canessi Climendi, the rebel leaders, were willing to accept that.
So Minio sent his secretary with two Nauplion citizens with the kapetanioi to meet the rebels and record their oaths to remain at peace. Minio wrote the sancakbeg about this, and received from him a pardon and safe-conduct for the rebels.

Minio urged the pardon on the Signoria, pointing out all over again that the offended side had already given a pardon. Further, this was a matter of 77 men, all of them first-rate men with good horses that the Signoria could ill-afford to lose. He was taking a great risk: had his proposal been resented in Venice, he could have lost any future position and could have been hit with enormous fines. Then Minio wrote something else, something he had not written the Signoria before because loyalty to a senior officer was such a supreme Venetian value. Minio explained what had happened to prompt the Nauplion revolt:

The Magnificent Captain General, held a review . . . through the bad information given for their advantage by those who were close to his Magnificence, . . . many of the old and competent stratioti have been rejected and their appointments annulled, and other useless ones taken on. Mexa Busichi, a competent man, and personally more valuable than his other Busichi brethren . . . was downgraded and listed as a simple stratioto. . . . Elia Sagan, who was a kapetanios of the stratioti, a provisionato, and one of the old stratioti of this territory . . . and his brother who was also a kapetanios and provisionato and others of his family have died in Your Lordship's service . . . was not only discharged . . . by the aforesaid Misier Hieronimo, but was also beaten.

He said a great deal more than this. (See Letter 72) Minio’s sense of unfairness and his strong loyalty to ’his’ stratioti won him enormous loyalty in return. His arguments convinced the Signoria, and within six weeks the first pardons -- seventeen -- were issued. It took several months to get it all settled, and the Busichi had to be pardoned for assorted homicides as well, but it was done, and then Venice offered them all jobs fighting in the Ferrara war. How they were seen in Italy is described here .
In fact, the stratioti were so contemptuous of the leadership they got in Italy that they refused to fight if not assigned a leader of their own choice.  They were given Minio. The sequel to this story, and the Ferrara war, will be told in a few weeks.
Minio’s letters are dowloadable here.
The Greek Correspondence of Bartolomeo Minio:
Volume 1, Dispacci from Nauplion, 1479-1483.
Diana Gilliland Wright & John Melville Jones
Unipress: Padua, 2008.
Posted by Nauplion at 5:00 PM